This weekend felt like our 0th reunion. Although we’ve only been out of school for 2 months, this weekend was a last chance to get together before everyone spreads across the globe in search of success. And now, after many emotional farewells, I’m on my way to Vancouver to begin the next phase of my life.

The past 2 weeks were spent relaxing, spending quality time with my family, and reconnecting with old friends in Winnipeg. I didn’t get to see everyone I wanted to or spend as much time with some people as I had hoped, but it was a fulfilling two weeks. Thanks for everyone that took time to meet up. It was good to see everyone and hear about all the exciting adventures you’re going through. Congratulations Erin and Aaron on your engagement.

On Friday, I flew down to Toronto with my parents, my sisters, and Baba Coulson. I was quite impressed that they were willing to take time off work to spend a weekend with me while I received my diploma – none of them knew I was the Valedictorian. We had fun squeezing all 6 of us in a large car and driving to Waterloo – luckily we’re a skinny family.

On Friday night I decided to tell my parents I was Valedictorian. It was a carefully guarded secret and I was hoping to surprise them at the ceremony. But a few perks of giving the speech made it impossible to keep them in the dark for long. First, I was invited to the fancy Chancellor’s lunch with my parents. We got to hob-knob with the President, Provost, and Chancellor of UW. None of us like fancy dinner parties, but everyone at our table was friendly and the food was scrumptious. Sitting across from me was Sheena Luu, the Governor General’s medal winner for Engineering. I couldn’t believe it when I found out she was from Winnipeg too – Winnipeger’s Rock!

After lunch, I gowned up and went to the ceremony. Kelsey and Kerry found out I was Valedictorian when they were seated in reserved, comfy chairs in the front row of the gym. Perplexed, Baba told them to look in the program, and they saw that I was giving the Valedictory Address.

The speech went well. I’ll include a copy at the bottom of this post. The speeches before mine were boring, so that helped mine look better than it was. I was super nervous, so I talked a bit faster than I wanted too and rushed some parts, but I spoke loud and clearly and got laughs at the right points. Although sometimes the only person I could hear laughing was Baba. 🙂

After the speech I had several people congratulate me on my speech, including many I didn’t recognize. Three really hot girls came up to me and congratulated me. I should give speeches more often. 😉 I’m glad people enjoyed it.

After the ceremony, we took lots of pictures, and had a reception for the SE students. It was good to sit and chat with everyone. Other than the West Coast crowd, I’m not sure when I’ll see everyone else again.

On Sunday, we took father out for a big Father’s Day breakfast. As Dad commented, it was nice to have everyone together for Father’s Day. I’m not sure when the last time that happened was. Even when I was in Winnipeg, the past few years of Father’s Day have been spent at the Manitoba Marathon.

Sunday afternoon was spent celebrating Chris and Ayelet’s new marriage. The wedding was held in the park and involved a simple, but meaningful ceremony. It was great hearing stories about Chris and Ayelet and the speeches from the parents were all really good. I especially enjoyed Chris’s mom’s speech when she talked about the day Chris was born. It was also nice to hang out with so many university friends – kind of like an extension of the graduation from the day before.

Graeme kindly gave me a ride to Markham after the wedding and I spent the late evening talking with Erin and her family. We had a great time sitting on the deck and chatting. This morning, Erin’s mom cooked up some fabulous omelets and hash browns and we played cards until Erin had to drive me to the airport. I always have a great time hanging out with Erin and her mom.

Mr. Chancellor, members of the Convocation, fellow graduates, ladies and gentlemen: We are done! I’ll just give that a moment to sink in, because it’s just starting to hit me right now.
We are done! 5 years of hard work comes to fruition today. Today we look back at everything we have accomplished:
the classes we passed and the material we may still remember;
the co-op jobs we had and the experience we gained;
the friends we made and the bonds that keep us together;
the places we’ve lived and the roommates that made it bearable (or in some cases unbearable);
and all the life skills we learned that were never taught in a class room.

All these experiences can never be captured by a single piece of paper – the diploma we receive today is nothing more than an expensive wall ornament. But today is not about receiving a diploma, if that’s all you wanted the school would have gladly mailed it to you. No, today we come together one last time to reminisce, to laugh, to cry, and most of all to celebrate a shared journey that shaped who we are today.

It’s difficult to talk about a common university experience because each of us took different paths to arrive at this point. But I’d like to think that there are a few experiences that each of us have in common.
I hope that everyone here has been to the Bomber at least once. I know many of us have been more than once.
I hope everyone watched a guest speaker or attended a lecture for a class you weren’t enrolled in.
I think most of you have skipped an early morning lecture because you were out late having fun the night before.
And everyone has probably experienced the joy and pain of spending all night working on an assignment, just to finish it minutes before the deadline.
And I really hope that at least once you did something wild and crazy – something you never would have imagined yourself doing while you were in high school.
For me, that moment came in first year, during the Engineering Scavenger Hunt when I had my upper body covered in chocolate sauce. Ahh, memories!

When I arrived at Waterloo, 1750 days ago now, I was a socially awkward, scrawny nerd fresh off a plane from Winnipeg and without a single friend for thousands of miles. I moved into residence, unpacked, and met my roommates. It was all a bit bewildering and I remember feeling alone. But then Frosh Week started, and soon I was surrounded by a thousand other screaming nerds, worshipping, of all things, a giant Rigid wrench. My friends, I was in Nerdtopia.

The past five years have been full of memories. I’ll never forget Frosh Week, living in residence with new people, and making new friends. I may not remember Poisson distributions or how to integrate complex functions, but I still remember late nights spent discussing religion and politics, all-nighters spent coding, and early morning breakfasts at Mel’s. I’ll never forget applying for co-op jobs, juggling interviews with school, and the thrill of ranking day. I may want to forget the pain and suffering of work reports, but I probably never will; I think I’m scarred for life.

And now I stand before you as an Engineering graduate, and one of Waterloo’s first ever Software Engineering grads. Still scrawny and socially awkward (some things never change), but now I have a degree, great friends, and a lot of memories.

I hope you have a chance today to sit down with your friends and family, to think about every day you spent at Waterloo, and to discuss the memorable moments you never want to forget. For many of us, today will be the last time we see each other for a long time. But you never know when you’ll run into an old friend. Just a few weeks ago, I was sitting in a beer garden in Munich, Germany, when I glanced over and saw Mike Brimner, a friend, classmate, and fellow graduate, sitting at the table beside mine. The world may be a large place but Waterloo Engineers are like a gas, we seem to move out to fill that space, in search of adventure, opportunity, and new challenges. You never know when you might run into a fellow grad, so keep your eye open for their friendly face and the iron ring on their finger.

When times get tough, I hope to look back on the degree I will receive today and the 5 years it took to achieve it. As a first year student, 5 years looked so far away, the task of finishing so daunting. There were times along the way where I doubted myself, my choice of university, and the program I enrolled in. But I know the strength and perseverance that helped me to get through this degree will be there to get me through all life’s struggles. And with that knowledge, I hope each of us takes on life’s challenges head-on and dares to build the unbuildable. Albert Einstein once said “Scientists investigate that which already is; Engineers create that which has never been.”

So go forth, building the technology of the future, well-equipped with the skills we have learned, with confidence and humility, knowing we don’t know it all, but knowing we can get through anything. Our journey together is now over, and we’re set to go our own ways. But I know that our paths will never stray far and when they cross the friendships shall remain.

Thank you, have a great day, and happy birthday Lisa. 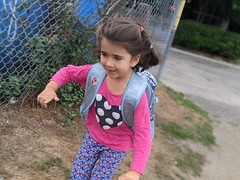