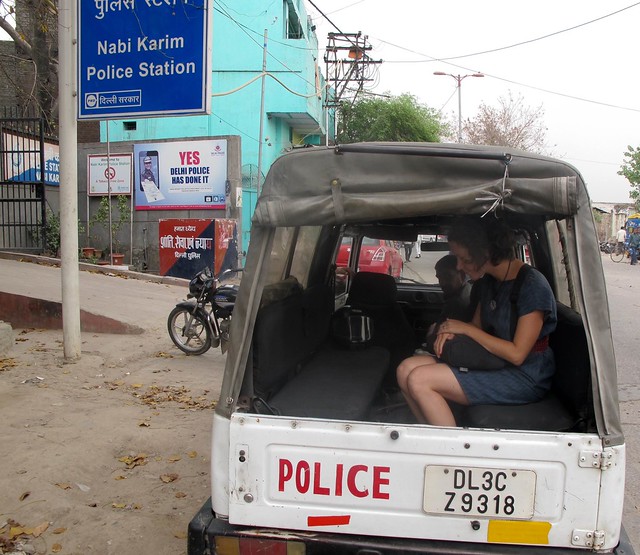 The good news first – Daniel Georges has safely arrived in India to accompany us for the last two weeks of our trip. The bad news – he spent most of his first morning in the police station. But it wasn’t his fault.

I had my cellphone pick pocketed after breakfast this morning. I was crossing the street when a group of young men bumped into me pretty hard. I didn’t think much of the incident until a minute later I noticed my phone was gone. Luckily my wallet was in a zippered pocket. The guys were long gone by the time I noticed, and I’m not sure I’d recognize them anyway. I was busy talking to Emily and Dan and trying not to get hit by cars when they bumped into me. We rushed back to the hotel to try and locate the phone and disable it, but by then battery had been removed. These guys were likely pros.

I should have been more careful. We’ve been in India for 3 months without any problems, but last night Emily had her sunglasses stolen from her bag. Delhi, it appears, is teeming with thieves. It’s a shame, because I was starting to like the city.

Filing a police report was an interesting experience. Like most encounters with Indian bureaucracy, it involved a lot of paperwork and waiting. But I was surprised when a police officer said “first we examine crime scene and then we take action. Come”. And we hopped into the back of a police truck for a drive by the intersection. I’m not sure what they learned from that, but it was more than I expected.

I’ve come to rely on my phone a lot, especially the data connection. It sucks to lose it after recently going through a lot of effort to get a new sim card. With only two weeks left, it’s not worth replacing it. We’ll just have to travel the old fashioned way, relying on planning, a notebook, and wifi hotspots (for Emily’s iPad). There is a decent chance the police might recover the phone now that I’ve reported it stolen and given them the IME Number, if this article is to be believed, but I’m not going to get my hopes up.