Saturday morning we jumped on an early train to Cardiff and ended up in the capital of Wales just before lunch. I was hoping to experience some Welsh culture and experience the local tongue ;-). Unfortunately not many people in Wales speak Welsh (especially to dumb tourists like me), but there were plenty of bilingual signs that had words with 4 f’s, 3 g’s, and no vowels.

The major tourist attraction in Wales is Cardiff Castle and it did not disappoint. When we arrived in Wales it was sunny and warm and a great day for walking outside. Cardiff Castle has an old Norman keep in the center of the courtyard and a newer recently inhabited castle along the west wall. The tour of the west wing of the castle showed some ornate rooms from Medieval and Victorian eras. There were amazing paintings and sculptures everywhere, but I wasn’t allowed to take pictures. My favourite room was the children’s room – it had scenes from fairy tales painted along all four walls. Another cool sight was the devil’s mask carved into the ceiling above the entrance to a male-only smoking room. The carving was really scary and designed to keep the women away. I wonder if I could design a sculpture for the opposite intent.

There were also animal sculptures all throughout the castle. The wall outside had a series of animal sculptures, and inside the castle there were a lot of parrots, beavers, and a ton of monkeys. One monkey sculpture had a nut in its mouth that could be pressed to ring a bell in a the servant’s chambers.

The old Norman bailey in the center of the courtyard involved a shell of an old tower surrounded by a moat. I managed to get some great pictures from up there and the top of the tower had an amazing view of Cardiff.

The castle had a little cafe in one of the older rooms in the basement of the west wing. We had a little snack there while we waited for our tour to start. The staff was really disorganized and it took a while to find out that Mince Pie has mince meat, but is completely vegetarian. I tried the mince pie and mulled wine – neither of which were that good, but were cultural experiences.

In the evening tried to find a restaurant that served traditional Welsh delicacies, but the guide book we were using was 5 years old and after walking around Cardiff for 30 minutes in the rain (our nice weather had vanished) we finally found the address but it was now a Chinese restaurant. It’s surprising how difficult it is to get directions when you can’t pronounce the street names (Cryws Road anyone?). Eventually we ended up eating at a Thai restaurant downtown. The restaurant was in the heart of the clubbing district and I was able to watch all the young people walk by. What struck me was how every guy wore a rugby shirt and seemed to be built like a rugby player. And the girls were all scantily clad, disregarding the now cold weather and rain. Cardiff definitely has a lot of night life.

P.S. I just upgraded my Flickr account to Pro, so you can view all my archived photos and now I can upload higher quality images. 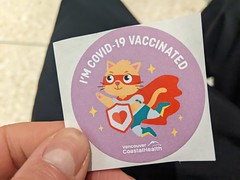