I already posted a recap of the past two weeks, but I purposely left out this because it warranted its own post.

I haven’t been snowshoeing since Grade 7 when we went to the Fort Whyte Centre in Winnipeg and used those giant, wooden snowshoes to clumsily tramp around in the snow. I don’t remember much of that trip, and yet I still have fond memories of snowshoeing. When Christina decided to plan a trip up to Grouse mountain for some snowshoeing and ice skating fun, I was giddy with excitement.

The weather was beautiful but too warm for ice skating, so instead we got 4 hours of snowshoe hiking or “schneeschuh wandern” as Christina would call it. It was quite the adventure. Most people would expect snowshoeing to be a tame recreational activity, but we found a way to turn it into a near-death experience. Right at the start of our trip we managed to wander off trail and Christina slid 200 meters down an icy slope. For the first 10 seconds she was laughing, but then as she picked up speed and was unable to stop, her laughter turned to screaming. We watched helplessly as she slid down the mountain and got some serious airtime when she hit a few bumps. After she came to stop she said she was ok, but then stopped answering our questions. So, Dan and I decided to descend to help her back out. On the way down, I lost my footing and repeated her harrowing journey down the mountain, almost crashing into her, and ending up stopping 10 meters downhill. I survived the journey intact, Christina had some scratches on her face and a collection of bruises, but otherwise was ok. The hike back up the mountain took about 30 minutes. So we were exhausted even before we started hiking the main trail.

The rest of the trip is best explained with this video montage I made. It’s my first foray into video editing, but I spent over 20 hours on it, so I hope you like it.

I also posted some of the pictures on Flickr. 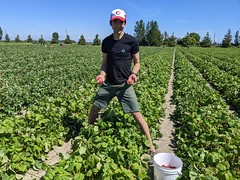