Description: The Bowen Lookout Trail is another great snowshoe route on Vancouver’s North Shore. Instead of views of the city, this one gives spectacular views of Howe Sound and Bowen Island. It’s a good route for beginners looking for a trail harder than Dog Mountain with some vertical climbing, but a short route that’s not too strenuous.

The hike starts at the Cypress Mountain chalet in the alpine area (not at the nordic area where the other snowshoe trails are). Backcountry passes are available in the Brown Bag Room in the old chalet (not from the ticket booths in the new chalet). Then hike goes through the ski area past the Eagle Express chair lift to the start of the snowshoe trail, following the orange-tipped poles. After 20 meters, the trail branches with the left fork heading up Black Mountain along the ski run. The right fork is the Bowen Lookout trail. The first kilometre is flat, as you hike along Yew Lake. 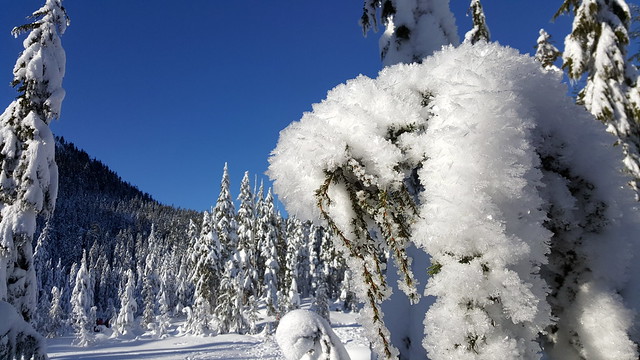 The steady ascent to the lookout is real workout, but it only takes 20-30 minutes. When we reached the top, clouds were obstructing the view but they periodically parted to reveal stunning vistas. It was awesome to see mountains materialize from behind the clouds and then disappear again. The lookout makes for a great spot to sit and have lunch.

Like Black Mountain, the trail is a lot quieter than Hollyburn or Mount Seymour. If you bring a crazy carpet (or just wear slippery pants) there are good opportunities to slide on the way down without having to worry about taking anyone out. The switch back section of the ascent has several chutes people have made that make for great sliding runs (trail erosion is less of a concern in the winter).

Dogs are allowed along the trail in the winter (in the summer they’re not due to sensitive marsh terrain), but must be on a leash and dog owners have to clean up after them. The few dogs we ran into weren’t on a leash, but as long as they’re well behaved I don’t personally mind (although a park ranger might react differently).

Here is the GPS map my phone tracked (also on Strava/Strava). More info on the trail and current conditions can be found on the BC Parks website. Also, remember to check the avalanche risk before heading up.

This trail heads through safe terrain but it’s good to be prepared.

Transportation: There is no Translink bus service to Cypress Mountain, but there is a private Cypress Coach that will take you up from Vancouver for $23 round trip. As long as you are not going alone, it probably makes more sense to drive. The drive will only take 45 minutes and parking at the top is free, just head to the alpine/downhill area to start the hike. Directions from Google Maps. 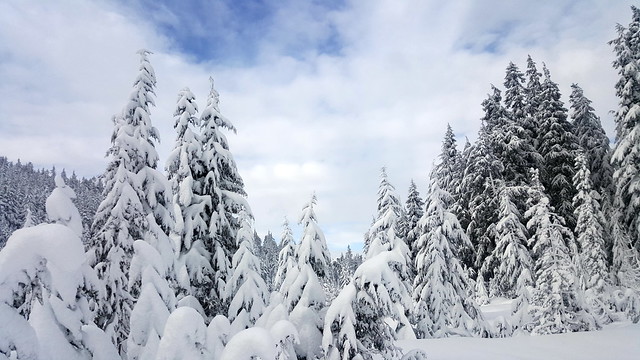