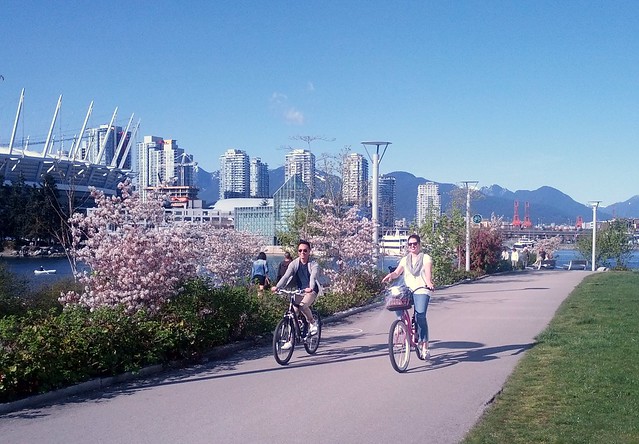 Only in Vancouver would cycling slowly along a recreational bike path be illegal. It’s ridiculous. I run faster than most seawall cyclists, and yet they’re required by law to wear safety gear. The City of Vancouver has its own by-law (60D) that extends the provincial helmet law (part of the Motor Vehicle Act) to the city’s car-free paths and parks.

It’s possible that skateboarders and rollerbladers have it worse than cyclists. They can’t legally use the city’s side streets unless bubble-wrapped.

Wrist guards are so important they were mentioned twice!

I realize these by-laws are rarely enforced, but if the city wants to show it’s serious about active transportation then it should scrap them. I think most people can decide for themselves if the risks of rollerblading without wrist guards is acceptible.

In related news, Vancouver’s bike share system has been delayed, yet again – now estimated to launch in 2015 (after being proposed in 2008 and approved by council in 2012). Dealing with the mandatory helmet law continues to be a stumbling block. Apparently they’ve worked out a vending machine solution. Seattle is set to launch its bike share program this fall with the same helmet vending machines, so we’ll see if they actually work or cause a logistical nightmare.