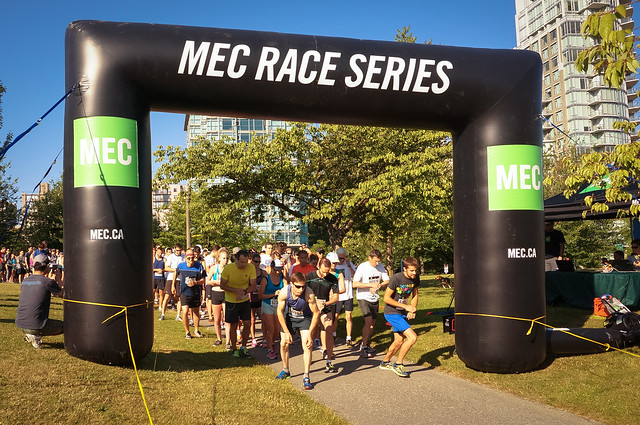 I’ve been trying to go under 40 minutes since high school and I’ve come close on a few occasions, but it has remained an ellusive target. After I ran the half marathon in May, I knew I was fast enough and fit enough to break that barrier, and that this opportunity might not come again. I quickly signed up for the next 10 km race in Vancouver – MEC Race FIVE , a 10 km loop around the Stanley Park seawall in July.

Two months passed and summer got in the way of training. I didn’t run nearly as much as I should have. Ultimate Frisbee once a week was my best workout, and quick sprints don’t prepare you for a 10 km race.

On race day I had serious doubts about going under 40 minutes. Two weeks before I tried running race pace and could barely maintain it for 5 km. I told myself and my friends that the 40 minute milestone would have to wait. I was going to run a comfortable pace and enjoy the beautifully sunny and super hot morning in Stanley Park.

When the gun sounded, the adrenaline spiked and I quickly found myself racing along just behind the leaders. I ran the first kilometre in 3:26, the second in 3:41. I knew I couldn’t maintain that pace. I was almost a full minute ahead of my goal. I quickly reset my frame of mind. The 40 minute 10 km was achievable. I just had to settle into a steady 4 minute pace and hope I could sustain it for long enough.

I ran the next two kilometres around 4:00/km, but then I started to tire. My pace dropped to 4:13 and the time I had banked in the first 2 kilometres slowly faded away. By the 8 km mark it was all gone and I couldn’t will myself to go any faster. I was kicking myself for not doing more tempo training. I almost gave up mentally, but I noticed that my GPS watch, which I was using to track my pace, was way behind the kilometre markers on the course, by almost 200 meters. Either the course was short or my watch wasn’t tracking properly. Either way, there was still a chance I could run the race under 40 minutes.

That was enough to will me on. I picked up my pace for the last kilometre and crossed the finish line with an official time of 39:48. 8th place overall. 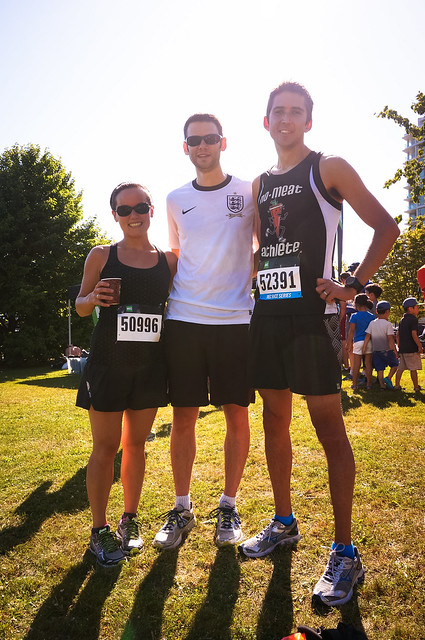