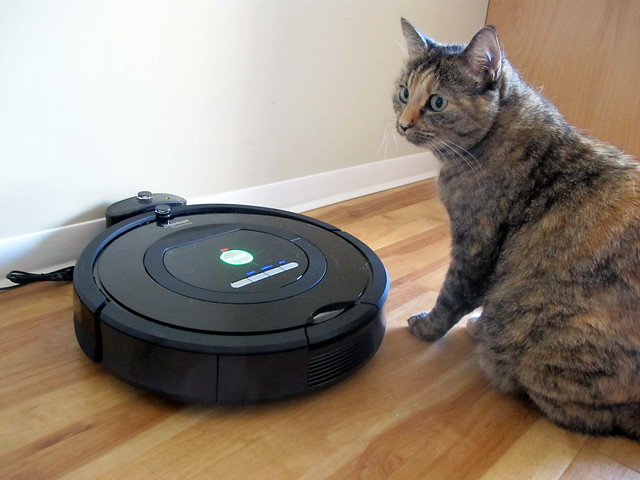 I’ve outsourced my duties as Official Floor Cleaner to Rosie, a Roomba 770 we named after the robotic maid on The Jetsons. With two cats, keeping the fur balls under control is a full-time job. Rosie is temperamental, but our floors are definitely cleaner now.

The Roomba does best with frequent, small cleaning jobs. Rosie is scheduled to clean everyday, usually when we’re out of the house. It has no problem handling hardwood floors and carpet, although it does a better job on the carpet, and excels at getting into tight spaces. It’s frightening how much dust and dirt it found under our bed. 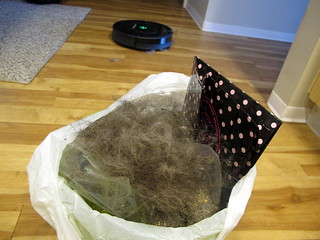 I had hoped it would keep the floors clean when we were gone on vacation, but it needs daily attention. The dust bin is small and has to be emptied after almost every run. When we first ran the Roomba, it collected so much dust we had to empty it mid-run. Every week or two, I take it apart to remove all the hairs that become tangled in its rollers. Not a lot of work, but not fuss-free either.

I’m impressed with how well constructed and engineered the Roomba is. It feels like it’s designed to last and be easily repaired. I’m less impressed with the artificial intelligence. I thought it would slowly learn the layout of our apartment, but it seems to bump around in the same chaotic way today as it did on its first run. Our dining room table has become Rosie’s nemesis. She spends a lot of her time caught between between the chair legs, just wide enough for her to squeeze between before becoming trapped. She often bumps around for 10-15 minutes before frustration (or the robot equivalent) sets in and she goes back to her dock defeated.

We’ve gotten better at Roomba-prooofing the house before we leave in the morning. Often, we’ve come home to find Rosie impaled on a towel or entangled on a cord we left lying on the floor. The best was when she snagged the cord for the blinds and pulled herself a few inches off the floor. Luckily the Roomba is smart enough to know when its stuck and will shutdown before causing permanent damage. 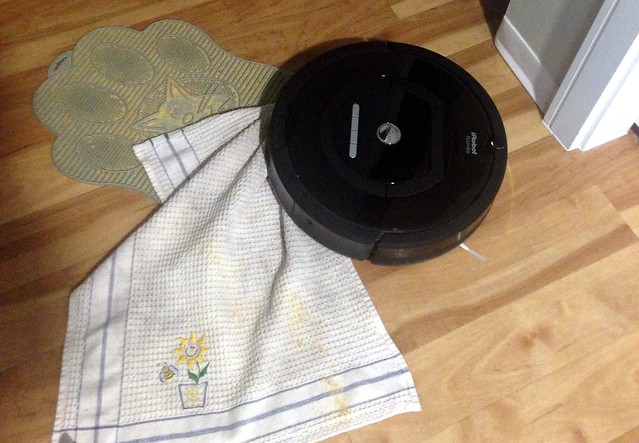 Rosie has worked so well at cleaning up after the cats, we’ve experimented using robots to play with them too.