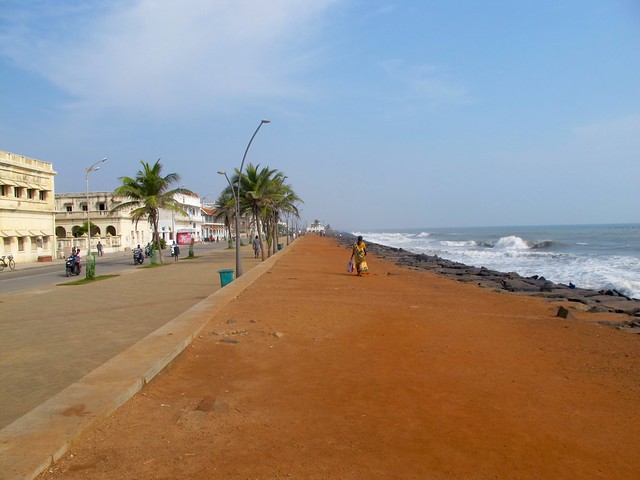 Pondicherry was the 3rd stop on our grand Indian adventure, a city with an interesting mix of Indian, French, and new-age spiritual influences. 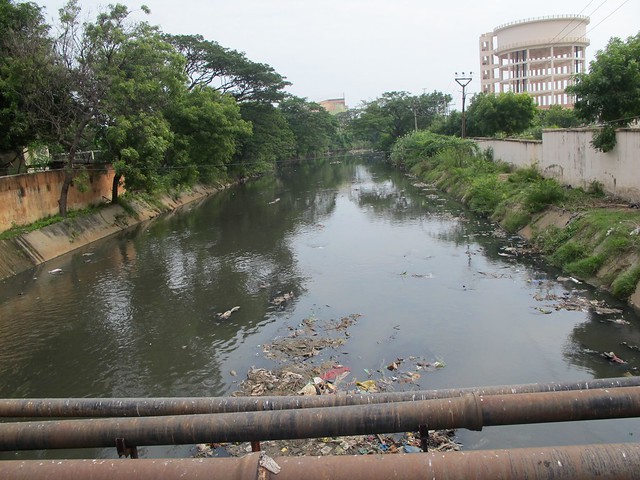 The city is split by a big canal, which sounds glamorous until you realize it is just an open sewer. The French half of town has the waterfront and grand, colonial buildings, although most are in disrepair. This is where most of the western, tourist restaurants and hotels are. I found the other half of the city, with its tiny shops, markets, and bustling life more interesting. 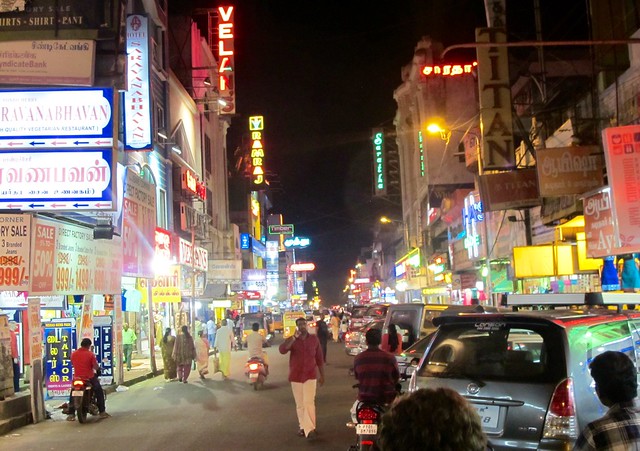 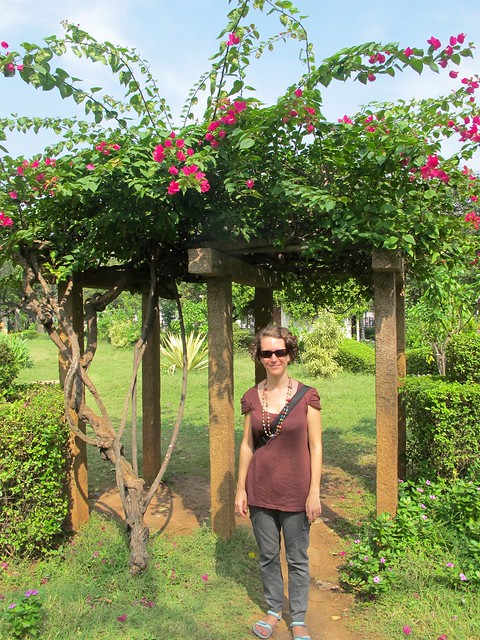 We were lucky to have five days in Pondicherry, because the first day was spent with me mostly lying in bed and recovering from food poisoning and the second day was a bandh and everything was closed. 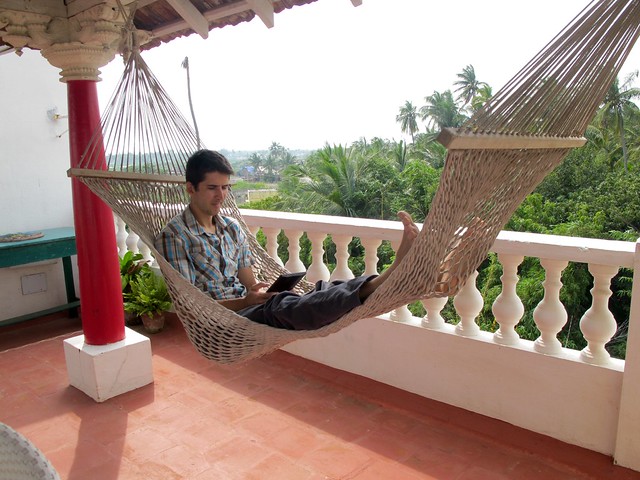 Our guest house had a great rooftop patio wIth hammocks and tables. It had a view over an open field (part of the port) where locals would gather to play cricket and bocce on the unused helicopter pad. 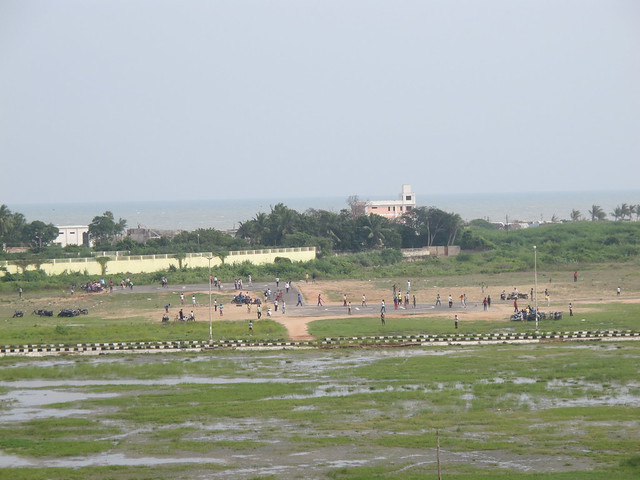 We joined a day-trip tour of the local sights. Surprisingly, we were the only white people. The rest were Indian tourists. Maybe that shouldn’t be too surprising, but in Peru and Vietnam almost all the tourists were foreigners.

Our guide took us to visit the the Aurobindo Ashram and Auroville – both interesting, spiritual places, but we didn’t get a proper feel in our quick visits. We also stopped at a sad local museum and a water sports park, which was cranking tourists through the most boring 10 minute boat ride I’ve ever been on. The only redeeming part was the dozens of giant jellyfish we noticed swimming in the water. But the most interesting stop on our tour was the Panchavadi Anjaneya Temple, where we showed up during a major event and got caught up in a throng of thousands of worshippers. They went nuts when the temple door opened, the chanting and drumming intensified, and everyone surged forward to see the giant idol of Huaman, a Hindu god. It was crazy, surreal, and a little frightening (mostly because we lost our guide). 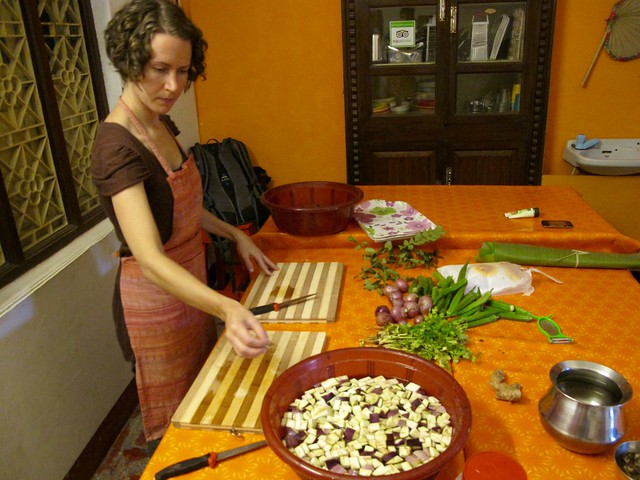 We also spent two mornings doings yoga class and a cooking class at SITA, a local cultural organization. The yoga was very different than what I’ve practiced in Vancouver. Instead of a strength and stretching workout, there was a lot more focus on breathing, chanting, chakras, and the spiritual side of yoga.

The cooking class was awesome. We started by going to the market and buying the ingredients. Then we cooked up a fabulous lunch of vendakkai (okra fry), kathirikai gothsu (eggplant dish), sambar, rasam (broth-like digestive), and rawa halwa for dessert. I’m keen try to replicate them at home, or if we get a kitchen while traveling. 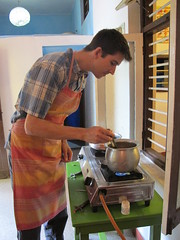 There are a lot of western restaurants in Pondicherry. We preferred eating at the Indian joints (cheaper and tastier) but it was nice have fresh baked baguettes for breakfast. 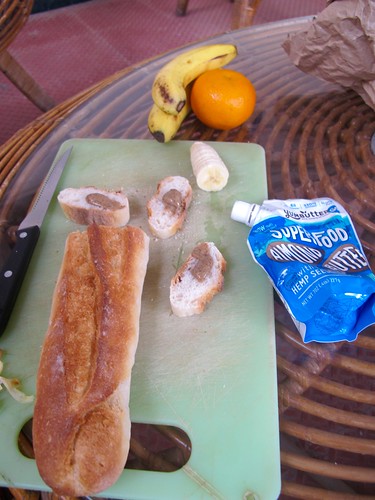 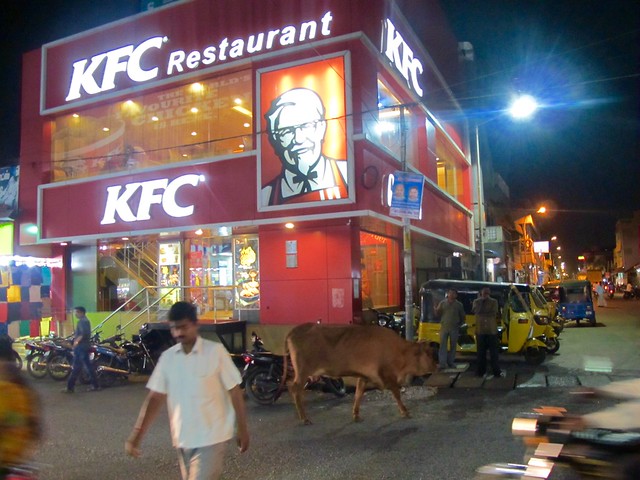