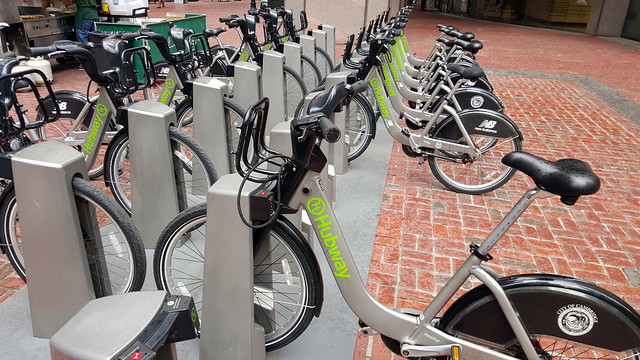 Vancouver is finally getting a bike share system. Fingers crossed, bikes should be on the ground and ready to roll mid-June.

It’s been a long road. The City of Vancouver first started exploring bike share systems in 2008, and signed an initial contract to deliver one in 2013 (but that fell through when BIXI went bankrupt).

The biggest hurdle has been our BC-wide, all-ages, mandatory helmet law (which I’ve written about before). There still doesn’t seem to be a good solution. When bike share was announced in 2013, the plan was to put yet-to-be-invented helmet vending machines at every station. 3 years later, that technology still doesn’t exist. Now the plan is to just leave helmets with the bikes and periodically clean them.

Ignoring the helmet problems, I think Vancouver’s done a great job choosing a bike share vendor and picking the initial service area. For bikes and stations, the provider will be Smoove. The main difference between Smoove and BIXI (which other Canadian cities have and most people are familiar with) is the Smoove bikes are smart and have minimal station requirements, while BIXI bikes are simple and the have the smarts. This means Smoove bikes have GPS tracking and can be locked anywhere (although there will still be dedicated stations), a system more like Car2Go. 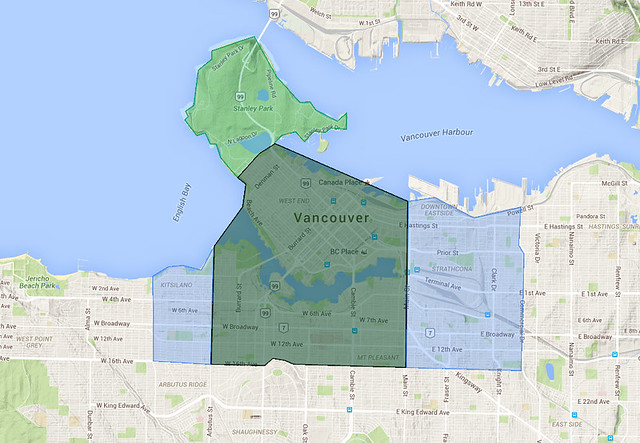 The initial service area will be east of Arbutus, north of 16th Ave, and west of Main street (including Stanley Park). There will be 1000 bikes and 100 stations at launch, expanding to 1500 bicycles at 150 stations by the end of 2016. If all goes well, the first expansion will move west to Macdonald (including Kitsilano) and east to Commercial Drive (the blue areas on the map above).

The initial area includes Vancouver’s densest neighbourhoods, the business district, 11 km of uninterrupted Seawall, the most popular tourist attractions in the city (Stanley Park, Granville Island, Vancouver Art Gallery, and Science World), plus separated bike lanes and bike routes with only modest hills. With 150 stations in the initial area, that would give Vancouver a station density close to New York. Imagine stations every 2 blocks in most areas (see this example by UBC’s Carter Xin for an idea of station location).

There is absolutely no reason bike share shouldn’t succeed in Vancouver, except for helmets. The most recent city that has tried to launch a bike share system with a mandatory helmet law, is Seattle (which also happens to have similar weather and topology). The results have been disappointing and many people blame the city’s helmet law. When Seattle launched their bike share system in 2014, they were planning on using the same helmet vending technology that Vancouver was considering. It wasn’t ready at launch so they decided to just leave bins of helmets at each station. 2 years alter, that temporary solution is still in place and Seattle’s Pronto system is paying $85,000 a year to maintain its helmets (in a system with only 1000 bikes), and the vending machine solution is still nowhere in sight.

All that to say, I’m looking forward to Vancouver’s bike share system. I happen to live and work in the initial area, and even though I own my own bike I plan on getting a membership and adding bike share to my transportation options. I just wish someone in provincial politics would have the courage to admit what research has been showing for some time – that our mandatory bike helmet law isn’t saving lives and is a hindrance to increased rates of cycling.