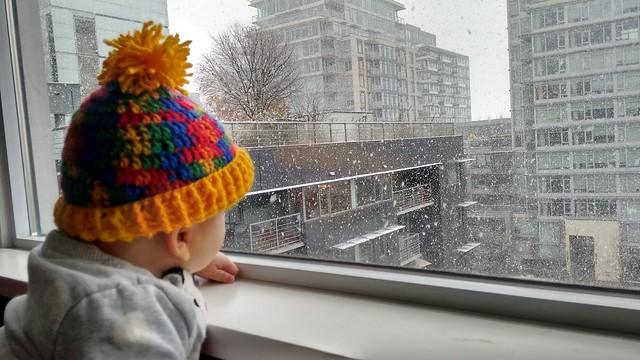 December is always a busy month, and Astrid made it more exciting with a bunch of new developments, including eating solid food, sitting up, rolling over, and getting croup. It also snowed in Vancouver, which made it feel much more festive. 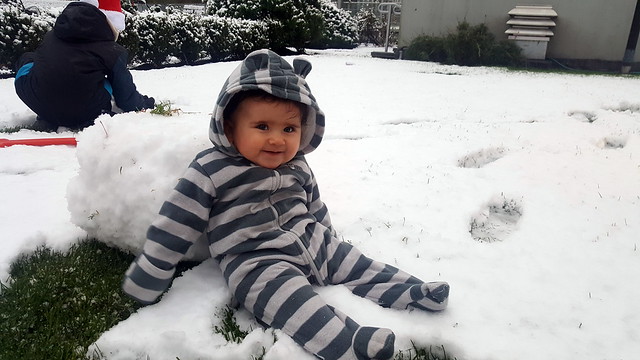 Astrid loves looking at the snow and she enjoyed playing in it the first day. But I’m not sure she likes the cold. She wasn’t too happy being outside for extended periods. After a week of sub-zero weather, she picked up a wheezing cough that eventually prompted a visit to the walk-in clinic. The doctor said she might have asthma and prescribed an inhaler. A few days later, Emily took Astrid to our family doctor who said it was just croup and she would recover all on her own, no inhaler necessary. 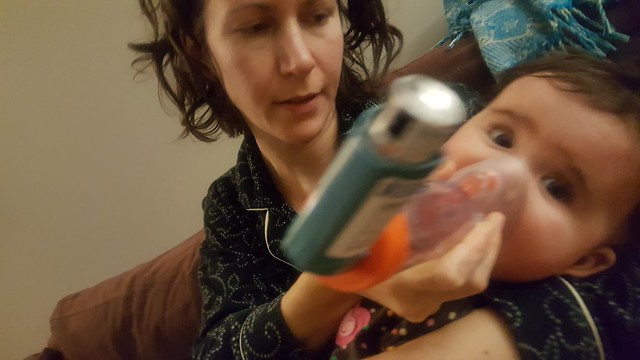 And by Christmas her croup was pretty much gone. A nice Christmas present. 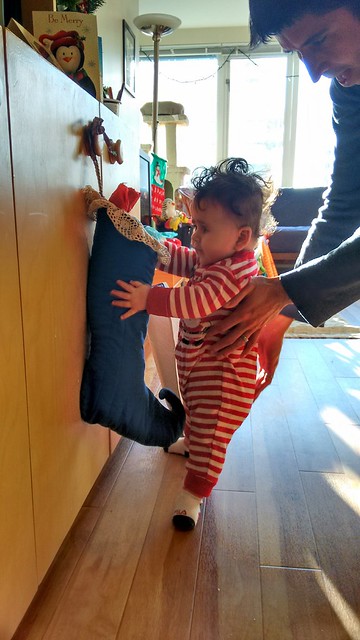 Astrid had a number of development leaps this month. She smiles and laughs a lot when she’s amused. She’s learned how to rollover consistently in both directions, but rarely on demand. She definitely finds it easier without a diaper on. 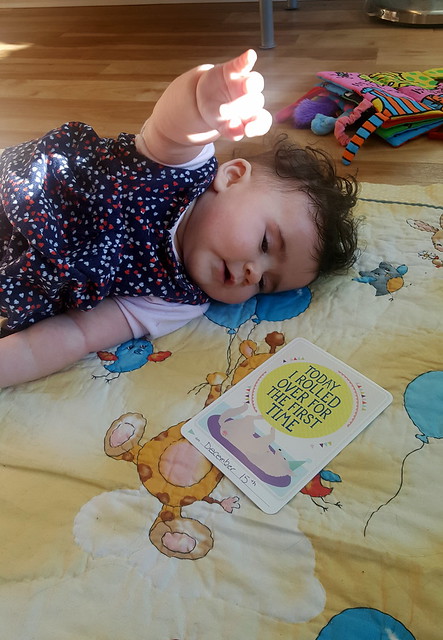 She also learned how to sit up on her own without any assistance, which we only noticed when she was chatting with Baba and Gido on Christmas morning. 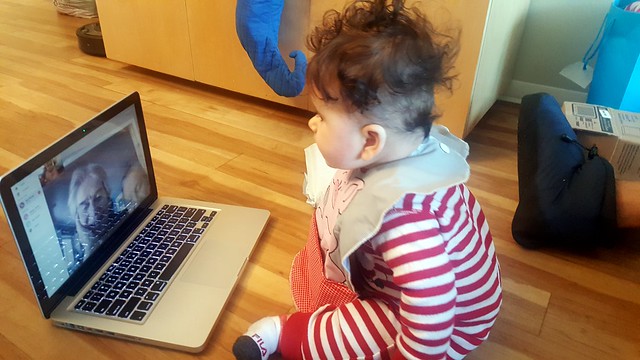 She’s also eating solid food now and continues to chew on anything that comes near her face. We usually feed her pears, applesauce, and carrots. I think pears are her favourite at this point. She’s also tried avocado, perogy filling, borscht, vegan sour cream (not a fan), and other dishes we’re eating that aren’t too spicy. 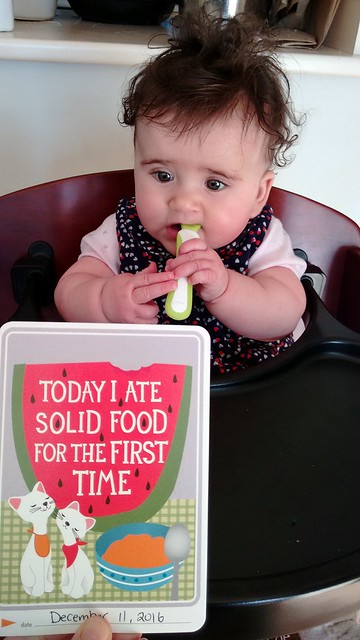 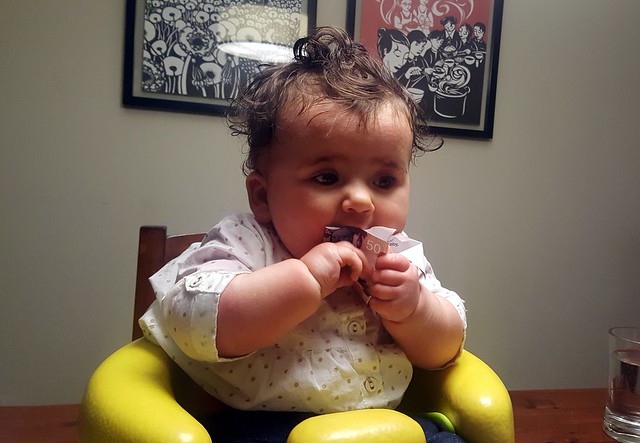 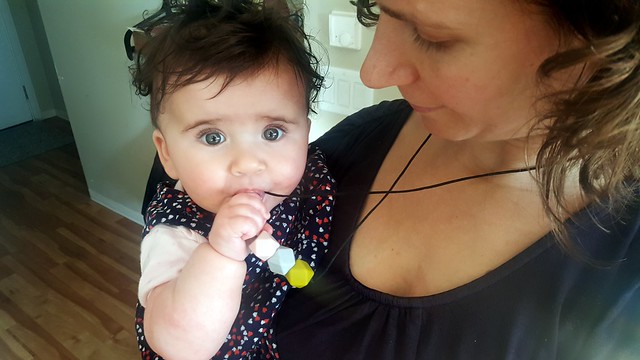 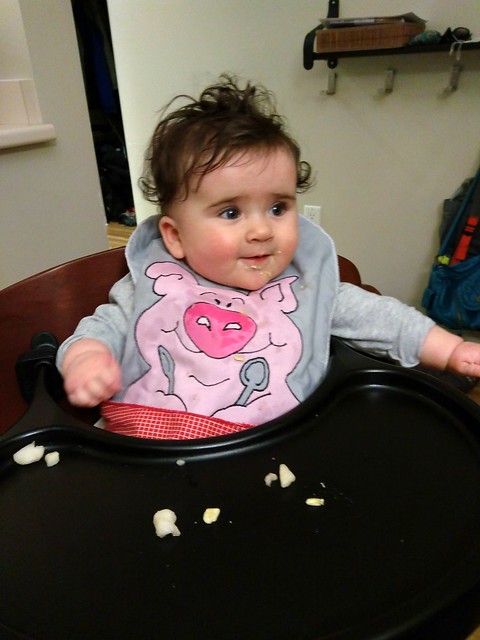 All of these new skills came at a cost – her parents sanity. The first 2 weeks of December saw a big sleep regression. It started with her naps. She started to have a really hard time falling asleep. She would cry as soon as she entered her bedroom. None of the old tricks worked anymore (swing, walks, soother). We’d spend 45-60 minutes trying to get her to sleep and when she finally gave in she would only sleep 20-30 minutes. After a week the lack of naps started to affect her nighttime sleeps. She was waking up every 2-3 hours. 😦 After getting used to 12 hour night sleeps, this was very hard to deal with.

The stress of this situation fell largely on Emily since she handles most of the naps and nighttime feedings. The morning after she had a particularly trying day, she decided to try something different. She just put Astrid down in her crib and walked out to see if Astrid could put herself to sleep. She cried for a bit, but it worked! She fell asleep on her own. And it continued to work for subsequent naps, often with little or no crying. Who knows if it was Emily’s approach or the timing, but Astrid picked that moment to end her sleep regression (after 2 weeks). She still isn’t sleeping through the night, but she’s lasting 4-6 hour so there’s often only 1 or 2 nighttime feedings. 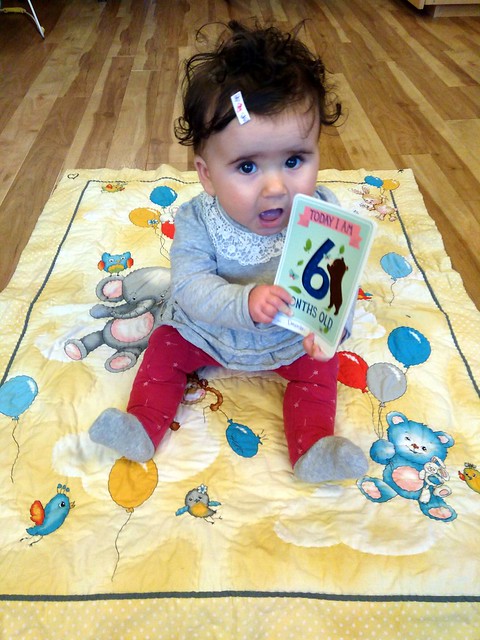