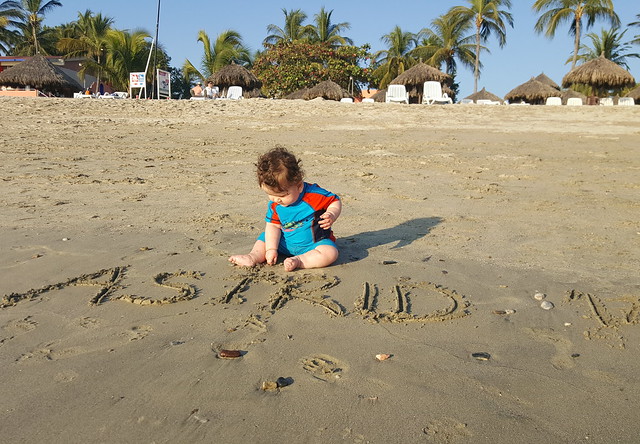 February was spent jet-setting around the world and enjoying snow and surf. It was a month full of ups and downs and several highlights and lowlights.

Highlight #1: Astrid used her passport for the first time as we flew to Mexico for her Auntie Kerry’s wedding. The highlights were the beautiful sunset wedding ceremony on the beach (and officially welcoming Megan, Katie, and Tyler to the family), the time spent relaxing by the pool with our relatives, and the awesome weather and lack of snow. 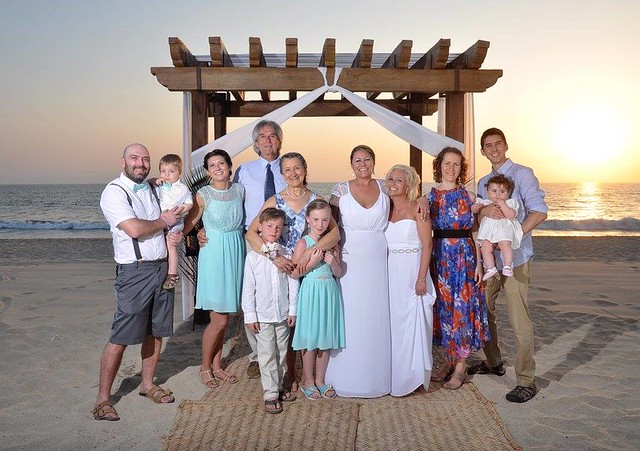 Astrid did well with all the changes (new foods, hotter climate, new faces, and 2-hour time change). It took her a few nights to get used to the hotel room and crib, but she slept well for the most part. 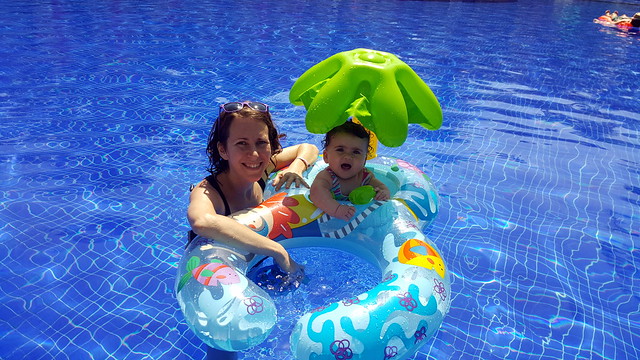 Most days were spent rotating between the buffet, the pool, the beach, and then back to the room for a nap. Astrid amazed everyone with her ability to destroy bananas and make a huge mess at mealtimes. She enjoyed floating in the pools and eating sand. We got off the resort once – took a taxi to Sayulita to check out the hippie, surf town. But for the most part we were slaves to Astrid’s nap schedule. 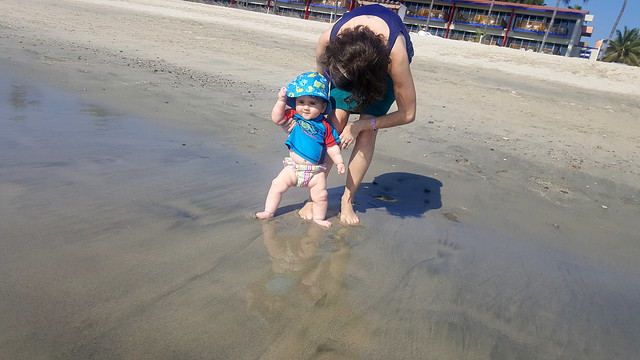 Lowlight #1: The biggest lowlight of the month was Astrid’s worsening eczema, especially on her hands. Baby-led weaning has not been kind to her skin, mostly from contact with acidic foods. Her skin got especially bad after we left the warm, humid Mexican air. We’re slowly getting it back under control by limiting the foods she’s eating, putting socks on her hands so she doesn’t bite and scratch them, moisturizing every few hours, and using hydrocortisone cream on the worst patches. 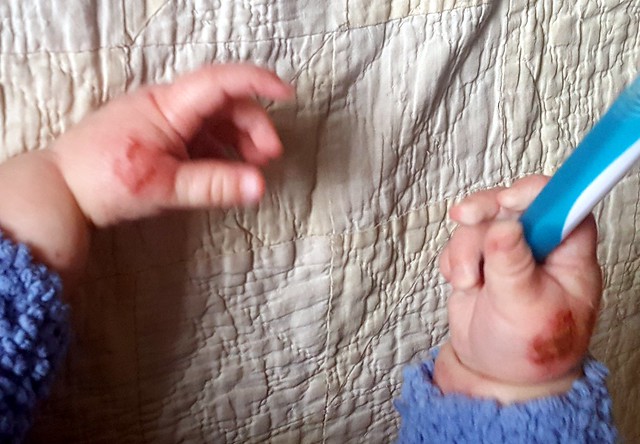 Highlight #2: Early in the month Dan visited from San Francisco, and Rhea and Tina also came over. We got a dump of snow that day so we had fun playing in the snow with Astrid. 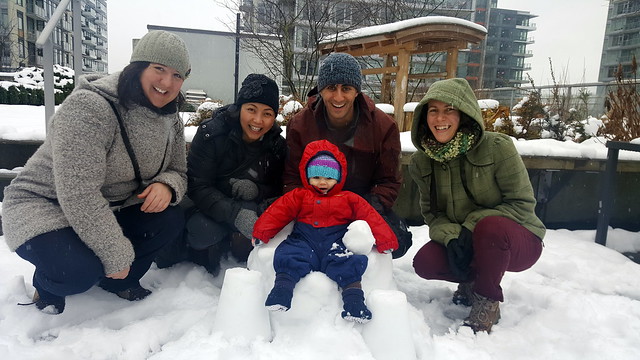 Dan made this amazing snow throne for Astrid to reign over her subjects. 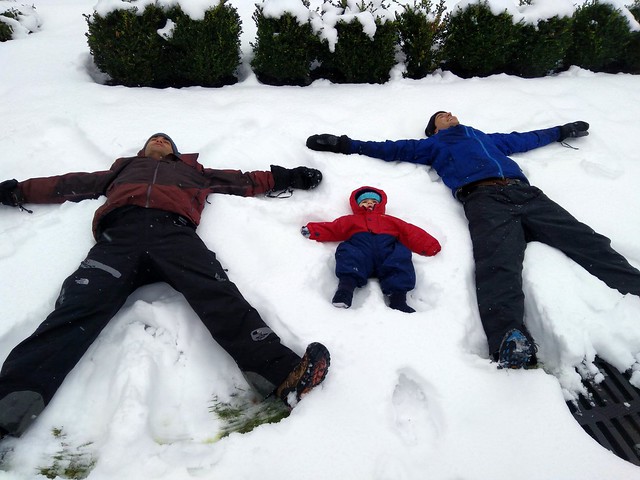 Lowlight #2: Is Victoria the city that never sleeps? According to Astrid it is. We had a good visit with friends, but had to cut our trip short by a day when Astrid became a sleepless, grouchy pants. She refused to sleep in her pack-and-play, so I spent hours bouncing her in the ErgoBaby to get her to nap. 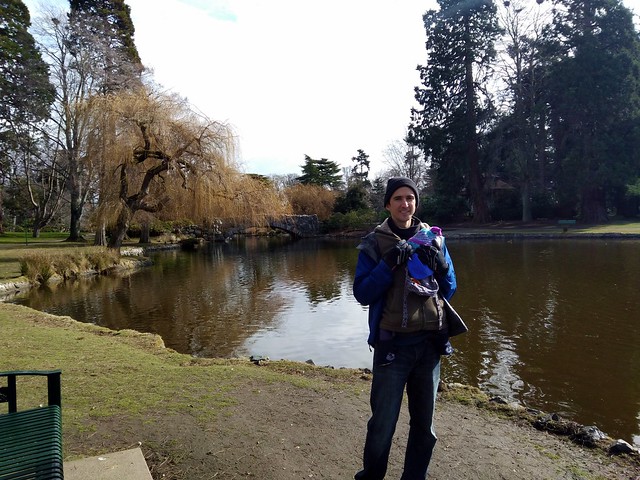 At night, she would fall asleep in our arms, but the second we tried putting her down she would start screaming. None of us got much sleep the first night. The second night, we tried co-sleeping with her for the first time. She slept much better, but it was a rough night for Emily and I. We were squeezed into a double bed with Astrid in the middle, afraid to move for fear of waking her. Midway through the night she rotated 90° so that when she flailed about she simultaneously punched me in the face and kicked Emily in the head, but we were happy she was sleeping.

Highlight #3: Astrid is starting to move more. She’s mastered rolling and has the arm strength to lift herself into plank position. She isn’t crawling yet, but she can cover a lot of ground by rolling, rotating, and shuffling backwards. We’ve ordered a large play mat to give her a surface to play on – she quickly rolls off the yoga mat and blanket we have for her now.

She’s also tossing and turning in her sleep. Often after a nap, we find her on her stomach or curled up on her side. The first time she napped on her stomach we kept checking on her to make sure she was breathing, but we’re used to it now. 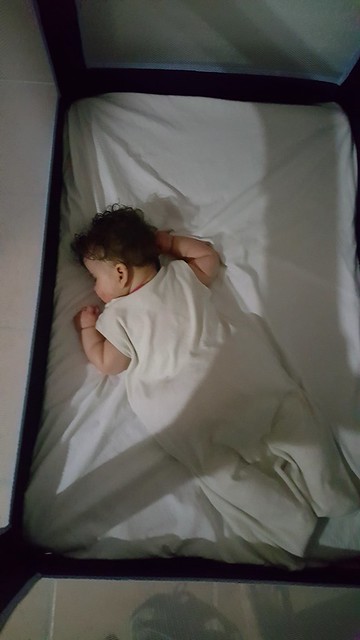 She is also very ticklish. I don’t remember her reacting to tickling before.

Astrid now has a Goodreads account, if you’re curious what books we read to her every night. She has quite the library. https://www.goodreads.com/astridnaut 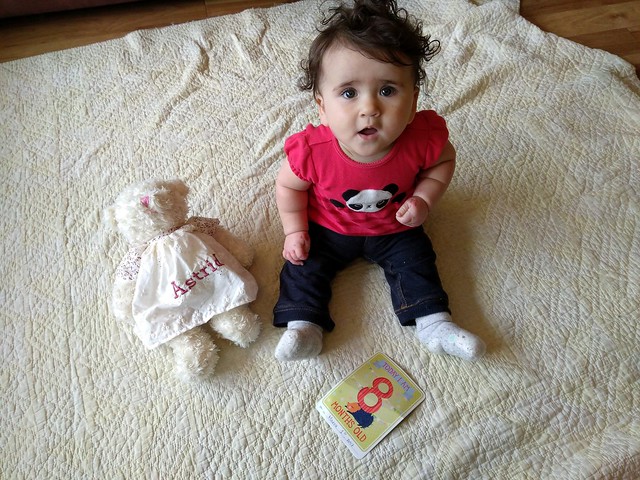