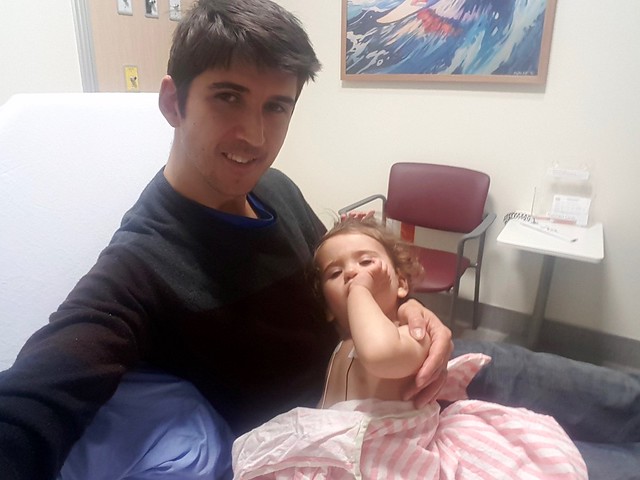 It’s been a crazy past few days. We were supposed to fly to Cancun Sunday morning, but a trip to Emergency ward at BC Children’s Hospital changed those plans.

It all started with a cold in late November that turned into a little cough. We didn’t think much of it until Wednesday last week when she started having fevers at night and coughing a lot.

We saw our GP on Friday and he said it was Croup and prescribed dexamethasone. He said it should get better within 4 hours.

That night there was no improvement, so I took her to a nearby walk-in clinic Saturday morning. The doc immediately sent us to Emergency at BC Children’s Hospital. It was a stressful bike ride hauling ass up the hill to BC Children’s with a sick child in the trailer.

We had underestimated how serious Astrid’s condition was. She was definitely wheezy, but she was in a good mood and playful – how bad could it be? When we arrived at BC Children’s, we were placed at the top of the triage list and got to see the next doctor, which should have been an indication how serious it was. And yet, I still clung to this hope that we would be discharged soon and be able to catch our flight to Mexico the next day.

Astrid’s lungs were really constrained and she was having trouble breathing. They pumped her full of steroids (Atrovent to start and Ventolin every hour after) and immediately you could see the difference. She hated using the puffer mask, but it was making it easier for her to breath. In the first few hours at the hospital, her heart rate was between 130-200 bpm. Her body was working really hard to pump the limited oxygen around. After a few hours of treatment it was between 85 and 150.

At 4:30 pm Astrid was moved out of Emergency into the Critical Decision Unit (CDU) for monitoring. Emily stayed with her, while I went home to finish packing. At 9:00 pm, they did a chest x-ray to see if she had pneumonia but the only thing they found was a small section of collapsed lung (which is apparently common when you have trouble breathing for so long). They almost released us at 11:00 pm. Astrid had gone four hours between Ventolin puffs without much problems, except when she was sleeping her SpO2 (oxygen concentration in the blood) would periodically drop below 90% causing alarm bells to go off. It went as low as 87% and the doctor said she had to stay the night, sleeping with the help of extra oxygen tubes in her nose.

After nearly 24 hours of excellent treatment (I really can’t say enough good things about the nurses and doctors at BC Children’s), Astrid was discharged at 7:35 am. The final diagnosis was Reactive Airways Disease (a vague and unhelpful catchall for all breathing problems). We had to do more Ventolin at home every 4 hours for the next 3 days and monitor her condition.

We missed our flight to Cancun, but we’re just happy Astrid is feeling better. We were all packed and ready to head straight from the hospital to the airport, but the doctors told us to take a few days to rest and see how Astrid is doing. The grandparents flew to Mexico without us and hopefully we will join them in a few days.

I feel horrible for not doing something sooner. It’s tough because we had been at the hospital a few weeks earlier for something that turned out to be nothing. We didn’t want to be the overreacting first-time parents yet again. And Astrid was in such a good mood even when she was sick, it was hard to think she was in need of emergency attention. Now we know to look for trouble breathing and wheezing. 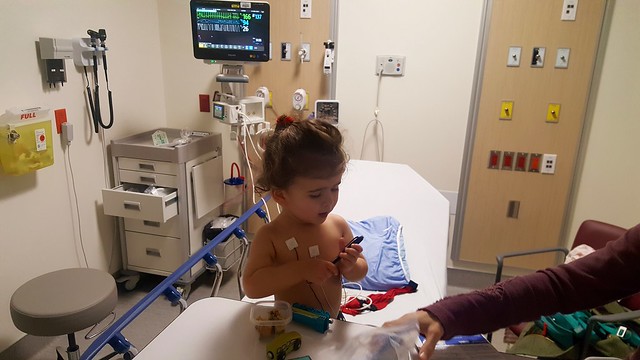