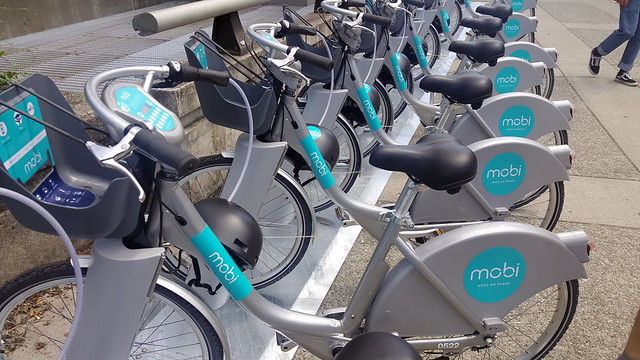 In November I won a free annual membership to Vancouver’s bike share program, Mobi by Shaw Go. At the time I was working in Richmond and commuting 15 km each way on my Norco road bike. I didn’t need a bike share membership but thought it might come in handy occasionally.

Five months later and now I’m using Mobi every day for my commute, logging 175 trips and 400 km. What changed? In December I started a new job downtown and discovered that bike share is surprisingly the fastest way for me to get to and from work. It’s about 2 minutes faster than taking public transit and 5 minutes faster than using my own bike, because of the time it takes to store my bike in the secure bike parking rooms on each end.

The Mobi bikes are definitely heavier and slower than my road bike, but I only have a 2.5 km commute so averaging 15 km/h on a Mobi bike is only a minute or two slower than averaging 20 km/h on my road bike. And that’s only because I have a long stretch without traffic lights.

The @mobi_bikes station at Granville and Georgia should be moved one block north to Dunsmuir bike route. The bikes are unusable now because they are covered in pigeon 💩 while the other stations nearby are all super busy. pic.twitter.com/9Zn11CvH8G

I’m guessing my summer commuting experience will be very different from the past 5 months. In the winter, I rarely had a problem finding a bike or a space to dock it when I was done. But in the past week, I’ve had 3 days where the station I normally use was out of bikes. The statistics below from MountainMath show that usage has really increased in the past week. I’m sure that’s due to the nice weather and Mobi’s recent expansion into East Vancouver.

Overall, I’ve been happy enough with Mobi that I’ll probably renew my membership. It doesn’t completely replace owning a bike for me – I still need my own to pull my daughter’s bike trailer. But for short commutes, I’ve been surprised to find it’s actually the most convenient way to get around.