Thoughts on the Freedom Convoy

On Saturday the Freedom Convoy made a return to Vancouver and local residents were ready – organizing counter-protests on Reddit and Discord. The goal was to support health care workers and keep the convoy away from the hospitals. Our mayor issued this statement:

As the Mayor of a city with an over 95 per cent vaccination rate, my message to the convoy is this: Vancouver doesn’t want you here. Make your point and then go home.”

I made a sign in the morning and went to greet the freedom convoy as they entered Vancouver. I support their right to protest, but they could have done that in Langley. If they want to drive to Vancouver and make a ruckus, they should be prepared for counter-protests.

I started at an intersection near Trout Lake with a bunch of counter-protestors waving signs. We got a lot of friendly honks from Vancouverites going about their daily routines. But I got bored waiting, so I biked east to find the convoy. I found them near Slocan so I hung out there by myself for a while waving my sign. 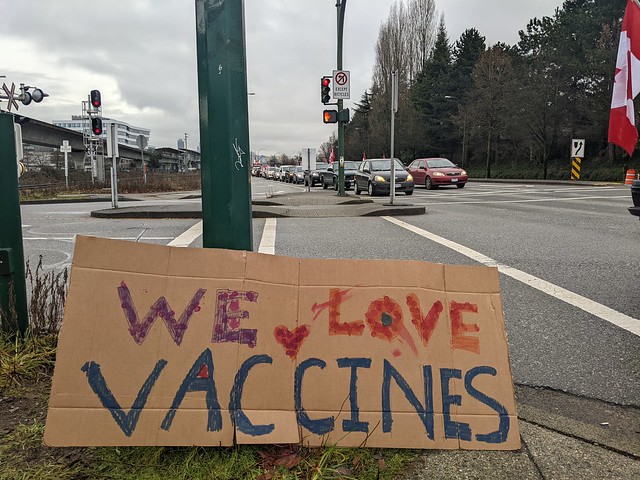 The main thing I noticed was most people in the convoy were friendly and upbeat. There have reports of aggressive behaviour in Ottawa, but almost everyone here was in a good mood (at least at this point – I think things got more tense later on). There was a lot of loud honking but I had earplugs.

I got a lot of thumbs ups from Vancouverites out for walks or driving in the other direction. A nurse came over to thank me. A few people told me I was wasting my time. And there was one really nice guy out for a walk who was worried about me and decided to stay for half an hour to chat and make sure nothing bad happened (I almost thought he was an undercover cop). He thought things could get ugly, but I never really felt threatened.

I was just hanging out with my sign, waving at the trucks rolling by. A lot of people thought I was there to support them. It was amusing to see the look on their faces when they actually read my sign.

Most of the convoy was pickup trucks. I only saw 3 big rigs. It took 2 hours for what I would estimate to be about 1000 vehicles to roll by. Not an insignificant turnout. But it really shows how inefficient trucks are at moving people. It took them almost 4 hours to get from Langley to downtown Vancouver – granted they weren’t in a rush and the counter-protestors slowed them down a lot. All of those people could have fit in 5 SkyTrain cars and been downtown in 40 minutes, but then they couldn’t honk their horns the whole way.

The majority of convoy participants just waved and smiled at me (some gave me the finger). Since they were stuck in traffic and moving so slowly I got to talk to a lot of them. Here’s a smattering of what people said to me:

“We support your right to get vaccinated” – Thanks. I heard this a lot and it made me genuinely smile. 😊 Most of the people weren’t anti-vaccine. They just wanted less restrictions on the unvaccinated.

“We are doing this for you and your freedom” – Thanks again. But seriously, I’m fine. If that’s why you’re here, let me save you the trip.

“Who’s part of the fringe minority now?” – I’ve been part of enough protests to know how good it feels to be surrounded by like-minded individuals. To feel like you’re not alone. Cycling with thousands of others in Critical Mass always made me feel great, but that didn’t change the reality that we were a minority and the vast majority of people drive cars everyday. And the reality today is the vast majority of Canadians are vaccinated and support vaccine mandates.

“Do you know what’s in the vaccine?” – I heard this a few times. Once from a lady stuffing her face with fluorescent candy. I asked her if she knew what was in the junk food she was eating? She didn’t. I imagine that she spent her time stuck in traffic “researching” it.

“8 million people have died from the vaccine.” – This guy was one of the few Vancouverites I saw come out to support the convoy. He tried to convince me that the vaccine had killed millions of people. And when I told him I didn’t think that was true, he accused me of being a paid protestor and kept yelling it over and over. “This guy’s a paid protestor.” I actually had to leave and bike to another intersection because he wouldn’t get out of my face. His smug smile will haunt me but there was no way to win that fight. He was so confident that he was right, he concluded I was being paid to say otherwise.

“Your sign sucks – did the vaccine give you brain damage?” – Other than the dog walker, this guy was the only asshole I had to deal with. He didn’t care that my daughter helped decorate the sign. He just wanted to be mean.

“Communism! Enjoy your freedom, commie” – I don’t even know what this means, but I heard a bunch of people yelling about communism (video clip). 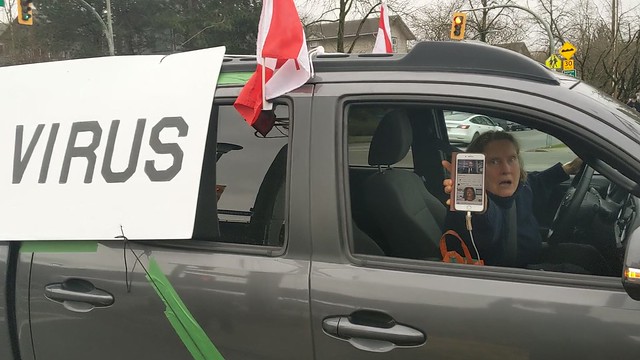 “Vaccines have mind controlling chips in them.” – This lady even showed me a YouTube video with “proof”. I had to ask her to keep her hands on the steering wheel. She came very close to rear-ending the truck in front of her.

“Do I look like a white supremacist?” – a sign carried by an Asian lady. She was one of only 3 visible minorities I saw in the thousand vehicles that passed by.

“Everyone vaccinated is going to be dead in 5 years.” – Then why are you wasting your time in a convoy? If you really think that 80% of Canadians will be dead in 5 years you should be liquidating assets, stockpiling goods, and preparing for societal collapse.

While I was chatting with the convoy in East Van, counter-protestors near Main Street succeeded in rerouting the convoy away from the hospital district. They also penned a lot of trucks in on Terminal and forced them to back up for 2 km.

My main takeaways from the freedom convoy are: