El Salvador is a slice of paradise. The weather is perfect, the water is warm, the food is good, and the locals are friendly. The tourism industry is still developing but it gives the country an authentic flavour.

Every winter my Dad escapes the cold clutches of Winnipeg and organizes a group trip somewhere warm. This year it was El Salvador and Emily and I decided to join them. All-inclusive resorts are not our preferred way to travel, but we thought it would be good to spend some time with my parents and El Salvador seemed more adventurous than the normal Mexico, Cuba, Dominican destinations.

My mother didn’t know we were coming. I didn’t know my sisters were coming. My dad had a web of secrets he managed to keep until we all arrived in Toronto the night before our flight to El Salvador. I was shocked when I bumped into Kelsey and Matt in the hotel lobby a few hours before my parents arrived. We schemed and joked about how to surprise Mom.

We managed to sneak into her hotel room and hide in the bed and behind the window curtains. When Mom came in, she dropped her bags and left before we could get out of our hiding places. I was still under the bed covers when I heard Matt whisper, “I think she left”. I was about to chase her down in the hallway when I heard the door opening again. This time Mom entered, heard us giggling, and called out: “Hello? Is there someone in my room?”.

Mom might hate surprises, but we enjoyed the look on her face when she realized that we were having a big family vacation.

We stayed at the Royal Decameron Salinitas, one of the few all-inclusive resorts in El Salvador. It sprawls along the Pacific Ocean with several pools and restaurants. It takes about 20 minutes to walk from one end to the other. The rooms were all beautiful with ocean views.

In the morning, I would get up early and go running. The security guards at the front gate had no problem letting me in and out, and I never worried about my safety. Even at 7 am, it was hot and humid and I was soaked in sweat by the end of my runs.

The spa at the resort was surprisingly good and well-priced. We had massages and also tried the Temazcal, a free 30 minute spiritual ritual inside a Mayan sweat lodge.

One interesting thing about this resort is that the majority of the guests were from other Central American countries (especially on the weekend). There were a sizable group of Canadians, but we were definitely outnumbered by families from Honduras, Mexico, Nicaragua, and even El Salvador. As a result, most of the entertainment was in Spanish and a lot of the staff only spoke Spanish. The tours were geared at Canadians with English/French speaking guides, but on the resort there was no forgetting you were in a Latin American country. I liked that.

The food on the resort was good, but it was difficult keeping to a vegan diet. Luckily I’m willing to be flexible when I’m on vacation, so I ate vegetarian instead. I just couldn’t resist the fresh papusas, stuffed with a refried beans and cheese. Every meal had fresh fruit and vegetables, salsa, corn tortillas, and some kind of bean dish (although you had to watch out for random bits of meat). The one thing I couldn’t find was fresh mango or coconut.

The beach in front of the resort is protected by a large breakwater, so there aren’t any large waves. The resort has another property 30 minutes away (accessible by a bus shuttle) with a long sandy beach. We spent one day there catching waves in the ocean, boogieboarding, playing ping-pong, and relaxing. If I wasn’t worried about burning in the sun, I could have spent all day in the ocean.

The best excursion we did was a day long hike of the Santa Ana volcano in Cerro Verde National Park. The hike started in a forested jungle and ended along the crater of Santa Ana with a view down to the pool at the bottom. The 8 km hike with 420 meters of elevation gain took us 4 1/2 hours including a 30 minute break at the top for lunch (map and elevation profile). For Emily and I it was a nice, light hike. For my parents it pushed their physical limits a bit, although they never struggled.

We went ziplining at the nearby Apaneca Canopy tours. I was impressed with how well run it was. They had 14 lines, starting with small ones (around 20 meters) to get used to the harnesses, and ending with long runs (280 meters) that went over a valley with a coffee plantation. The staff was good at keeping everyone moving and ensuring we were safe and having fun. 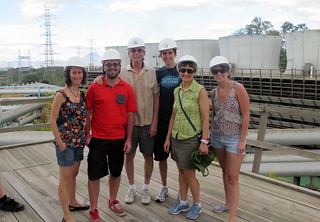 We took a bus trip and cultural tour down the Ruta de las Flores to check out some of the towns. We stopped at a market, a coffee mill, furniture factory, chocolate store, and a geothermal power plant. It was good to see some of the smaller villages, but I would have liked more unstructured time in town and less guided elements. The geothermal plant was interesting, but I didn’t need a 2 hour tour.