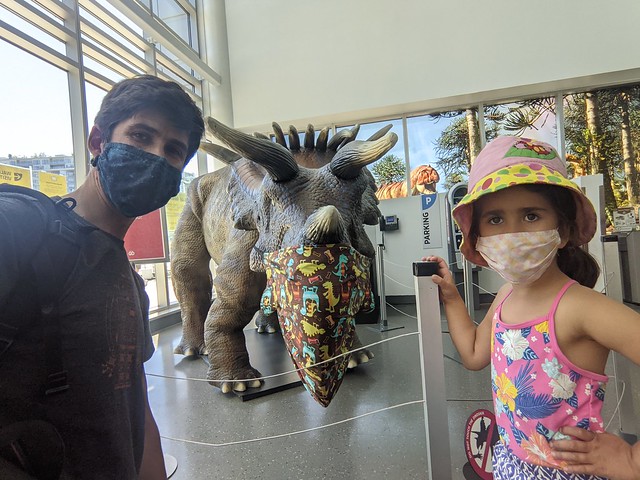 Today was Daddy Day, which is kind of like a reverse Father’s Day. Instead of a relaxing day all about me, Astrid got a special day to do all of her favourite things and I got to be the chauffeur. I took the day of work, Astrid skipped daycare, and we enjoyed the beautiful weather.

It was Astrid’s reward for finally kicking the thumb sucking habit 🎉. Two weeks ago her best friend Ellie started using the bitter nail polish to stop her thumb sucking, and we convinced Astrid that she should try it too. We’ve owned the stuff for years, but last time we tried using it she just sucked her thumb anyway until she was numb to the taste.

This time it was a huge success. The first night I had to brush her teeth a few times after she put her thumb in her mouth, but she eventually managed to fall asleep without her thumb. We gave her stickers on a reward chart so she could see her progress, and it got easier every night.

To reward her we bought her a fairy costume and I agreed to give her a special day off daycare. She helped me plan the day. We picked Tuesday because the weather forecast was for sun and heat, and Astrid wanted to go to the beach.

We started the day with her favourite breakfast – oatmeal with fresh strawberries. Then she got to watch videos for an hour.

We were at Science World when it opened at 10 am. The place was deserted. I’ve never seen it so quiet before. It’s normally a zoo but today it was almost relaxing. She had a blast exploring the exhibits for over 2 hours. Most areas were open with frequent hand sanitizer stations and signs encouraging families to physically distance themselves.

Lunch was sushi of course. Astrid would eat sushi for lunch and dinner, 7 days a week if we let her.

We played at Kits Beach for a bit, found some nice seashells and sea glass, and dipped our toes in the chilly water.

Then we went for a swim at the Kitsilano Pool, which was a much more pleasant temperature.

Astrid was the first one in the water and the last one out. Considering we didn’t have other kids to play with and didn’t bring any toys, I was surprised she had so much fun. She looked like a prune when we left.

Sadly, the concession stand was closed when we were done swimming. But we still ended the day with popsicles and ice cream at home. A good way to beat the heat.

Astrid is already talking about doing another Daddy Day. Although next time she wants it to be an Astrid Day, which is possibly just a branding issue or it might involve a lot more TV time.