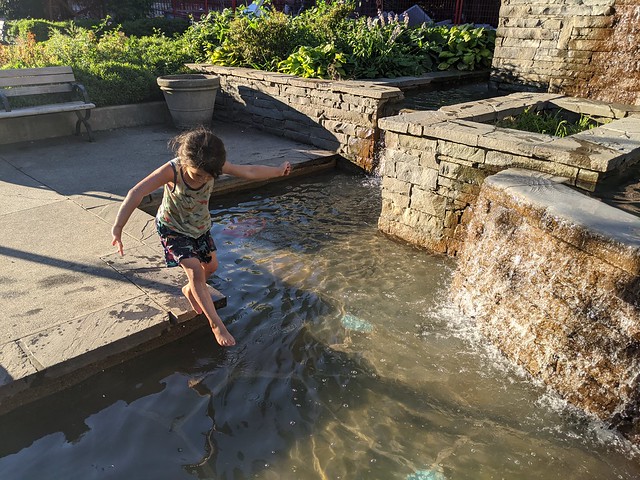 Temperatures have returned to normal summer levels here in Vancouver, but things were extremely hot last week. Probably the hottest temperatures I’ve ever experienced. Schools were closed; restaurants were closed; the temperature in our neighbourhood passed 40 C for the first time ever; across the province 100 year temperature records were shattered by several degrees.

Walking outside you could feel the heat radiating all around you. For several days it didn’t cool down at night so it was impossible to cool our home down. Opening windows and running fans barely made a difference. The most surprising part was the embedded heat everything absorbed. Glasses in the cupboard felt like they had just come out of the dishwasher. The tile floor in the bathroom felt like it had radiant heating running underneath it.

On the 3rd day of the heat wave, the temperature in our bedroom peaked at 38.5 C at 7:30 PM. We abandoned our bedrooms and instead slept in the living room, which was 4 degrees cooler.

On the weekend, we spent most of our time in parks with big shade trees and splash pools. On Monday, Emily and I went into our air conditioned offices and Astrid went to her air conditioned daycare. Only the cat had to sweat it out at home.

My tips for anyone else going through a heat wave:

For us, the heat wave was challenging (especially at night), but we got through it. For too many others it was deadly (719 people died in BC in 1 week – compared to 1,754 that have died of COVID-19 in 15 months). Images of hurricanes and wildfires dominate the media as the worst consequences of climate change, but heat waves are actually a more serious threat. If you have 20 minutes, this Front Burner interview lays it out really well.

Air conditioning would have made the heatwave more bearable, but it only makes climate change worse so we’ve consciously decided to make do with fans (at home at least). We survived the heat dome of 2021 (hopefully the only one this year). Good luck to everyone out east who is dealing with it next.

The heatwave might be over for BC, but the wildfire season is just beginning. It’s not looking good right now. Lytton spent the first 3 days of the heat wave shattering temperature records, and then burned to the ground on the 4th day when a wildfire rolled through town.