A Car-Free Family in Vancouver 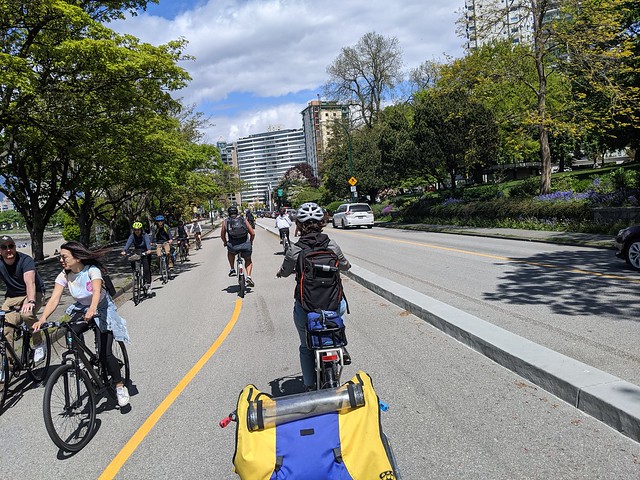 People used to tell us that we would need to get a car when we had kids, but we’re 5 years in and so far we’re doing just fine. That’s not to say we don’t drive. More than half of our annual transportation budget goes to operating a vehicle.

When we need it (camping trips, furniture shopping, or visiting a pumpkin patch), we use car sharing or car rentals. But our daily commuting is handled by cycling, walking, and public transit (which is much cheaper, healthier, and environmentally friendly).

It’s been a while since I did a deep analysis of my transportation expenses. Here’s how my expenses stack up since I moved to Vancouver back in 2006.

As our family has grown, our expenses have too. In 2008, Emily and I moved in together and combined our finances. In 2010, we moved close to downtown and reduced our commuting. In 2016 we had a kid, which nearly doubled our expenses to $3000/year (which is still pretty cheap). We drive more now (mostly for getting out of the city) and we’ve invested in more expensive bikes and trailers (for moving within in the city).

Vancouver is the car sharing capital of North America, which makes it easy to get a car when we need one. Within 500 meters of our home we have a number of Modo cars we can book. We use them for big shopping trips, day trips out of the city, and camping trips farther away. If we’re gone for more than 2 days, we’ll compare prices with the car rental companies, but Modo is often cheaper and more convenient.

In 2020, Emily and I both bought fancy new e-bikes. Riding them almost feels like cheating, zooming around the city with up to 500 watts of extra power to propel you. Vancouver’s hills disappear and you don’t even notice the extra weight from a bike trailer.

If you’re looking to buy an e-bike, I highly recommend the ones made by RadPower (use this referral link for $100 off). They’re solid, well-made, and you won’t find a better deal for $2000. The only downside is they’re heavy, so don’t try to carry them up any stairs.

Astrid is capable of riding short distances on her own, but we still heavily rely on a bike trailer for most of our family trips. It’s Astrid’s bubble of comfort no matter the weather. And it doubles as extra storage capacity for big grocery shopping trips. 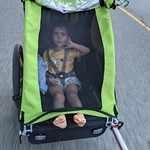 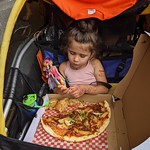 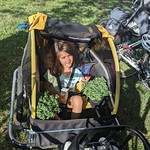 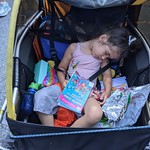 We’ve gone through 3 bike trailers over the past 4 years from Burley and Thule (both are great brands and I’d recommend them). The first one we bought used and the wheel kept falling off 😬. The second one was stolen 😡. Our most recent trailer is still hanging in there, but it’s a hand-me-down that has gone through a number of kids and it’s starting to show its age.

Bike theft is the single biggest deterrent to living a car-free lifestyle in Vancouver. In addition to having a bike trailer stolen a few years ago, I also had my RadCity e-bike stolen in April – after only 4 months of use! 🤬

A pair of determined bike thieves managed to gain access to our locked parking garage by prying open a door. My bike was locked but they busted it using a Ramset gun (judging by the spent cartridges). Security camera footage showed the thief riding away with my bike and my watermelon helmet at 2:30 am. It was the 2nd night that bike thieves targeted our building, stealing multiple bikes from our parking garage. I should have been prepared but I put too much faith in my mediocre u-lock. For a week after, our strata hired onsite security and reinforced the locks and doors. Luckily we haven’t had any thefts since.

Bike theft sucks. The reward for bike thieves is too high (easy resale market) and the risk is too low (they’re rarely caught and even hardly ever charged). I could rant for a long time about how awful bike theft is, how it discourages people from giving up their car and buying a nice bike, and how police don’t prioritize fixing the problem (there is only one dedicated detective in all of Canada). But it’s been 6 months since my bike was stolen and most of the trauma has now faded.

The only thing you can do is invest in deterrents, register your bike, get insurance. I’ve since purchased two heavy-duty Abus Granit XPlus 540 locks for our two bikes. They’re not cheap ($200 each) but they’re largely considered the best locks available and might have prevented my bike from getting stolen. Maybe.

My bike was registered with Project 529, so if the police ever find it I should get it back. But I’m not hopeful. The day after it was stolen, someone spotted my bike being stripped for parts in the Downtown Eastside, but by the time I got there it was gone.

I was lucky that our property insurance paid for a replacement bike. Most people aren’t that lucky.

I considered getting another e-bike, but opted for a traditional bike instead. As much as I love e-bikes and think they’re the future, I actually wanted more exercise. As a family, we’ve come to rely on having an e-bike to pull the trailer around, but we only need one.

My options for a new bike were pretty limited as supply shortages were widespread this summer. I found a nice Breezer Doppler Cafe at my local bike shop that fit me well. I like the simple drivetrain, the chain guard and fenders, the built in dynamo light, and the sturdy steel frame. I wanted a workhorse that will take some abuse with minimal maintenance – so that’s what I bought. To add some flair, I got blue pedals and spray painted a bike rack to match.

For most of 2021 we actually had our own car (kind of), and the experience was bad enough that we don’t want to have one again anytime soon.

We were looking after a friend’s Montana-licensed SUV that was stranded in Canada when the border closed. We got to use it whenever we needed it and she saved on storage fees. It should have been a win-win situation, but we had lots of problems with it. The battery kept dying and often it wouldn’t start when we needed it. We finally took it in for a tune up and had the battery replaced, but two weeks later the shocks broke. The owner of the vehicle paid for most of the maintenance repairs, but in August it was rear-ended and we got an expensive bumper repair bill. It was the other drivers fault and insurance should have paid for it, but apparently ICBC won’t pay to fix your out-of-province vehicle even if it’s the BC drivers fault.

In the end, we saved some money on car sharing costs but spent much more on gas and auto repair. Financially it might have balanced out, but we learned a more valuable lesson – car ownership isn’t much fun. I’d much prefer to rely on bikes for our daily transportation and have access to a variety of cars (that someone else maintains) when we need it.