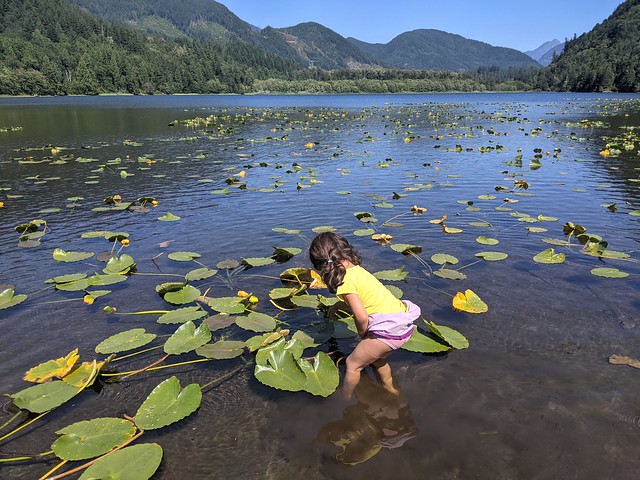 We spent two nights camping in Sasquatch Provincial Park (home of the legendary Bigfoot) near Harrison Lake. It was our first time in the park, which felt remote even though it is only 2 hours from Vancouver. The time went by quickly, but we have a longer 5 night camping trip planned to the Interior at the end of the summer (assuming forest fires aren’t too bad).

The highlights of this camping trip were our new hammock, canoeing to a great swimming spot, discovering old neighbours in the campsite next to ours, and roasting smores on the campstove (due to the province-wide fire ban).

Sasquatch has 3 campgrounds – Lakeside, Bench, and Hicks Lake. All three are relatively small, with nice treed sites that are well spaced out. The facilities are rustic – only water taps, garbage bins, and pit toilets. We stayed at Lakeside and enjoyed being right along Deer Lake. Bench is also along Deer Lake but a bit farther from the beach (although the swimming on Deer Lake is at The Point). Hicks is a hilly campground along a bigger lake with lots of boats and several places to swim.

Hicks Lake has canoe/kayak/SUP rentals. We rented a canoe for 2 hours ($42) which was enough time to circumnavigate the lake and stop for lunch and a swim. Most of the beaches in Sasquatch are rocky and a little painful without water shoes, but at the far end of Hick’s Lake there is an excellent sandy beach that offered the best swimming in the park (labelled on the map as Sandy Beach). Hicks Lake is really beautiful, but unfortunately the the tranquility is spoiled by motor boats. I really wish BC Parks would designate more lakes as non-motorized. Technically, Hicks Lake is limited to boats under 10 HP but we saw a few jet skis that were definitely higher-powered.

The main downside to Sasquatch park is the lack of showers. Normally this wouldn’t be a big deal for a 2-night camping trip, but all of the lakes in the park currently have Swimmer’s Itch warnings. There’s also a boil water advisory at Hicks Lake.

We also stopped at the popular Green Point day use area along Harrison Lake on our way home. The water is colder than Hicks or Deer Lake, but it’s a great place to hang out and there are lots of picnic tables.