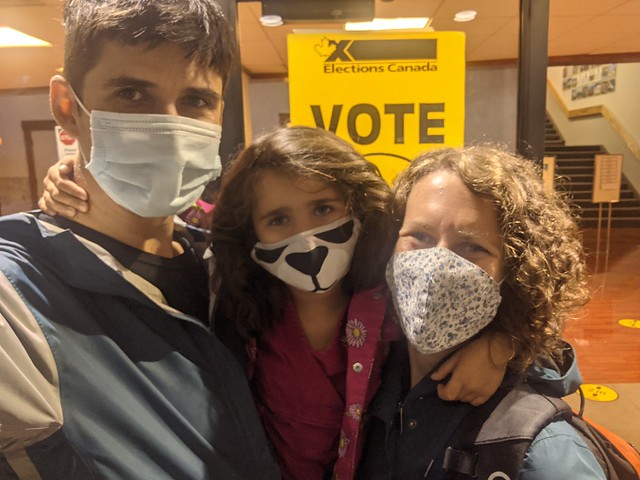 I’ve had a bunch of people ask me who they should vote for. If you haven’t voted yet, I have a few pieces of advice.

There are some impressive candidates that deserve your vote. 350 Canada’s Game Changers and LeadNow’s Courage To Lead Champions are all amazing. There is also a longer list of candidates endorsed by Green PAC and Climate Alliance. If you live in any of the following ridings, this is who I would suggest you cast your ballot for.

All the parties have platforms. Don’t bother reading them. They’re long and boring, and even if the party wins a majority, there’s a good chance half of the things in there won’t happen. Your time is better spent reading the condensed Platform Comparison or using the Vote Compass to figure out which parties are aligned with you. But here’s my simplistic take.

Liberals – Justin Trudeau and the Liberals have been in power for the past 6 years and their record is mixed. Their accomplishments include legalizing marijuana, introducing the carbon tax, and allowing medically assisted dying. But since 2015, Canada is the only G7 nation to see its carbon emissions rise (they also bought a pipeline) and housing affordability has gotten much worse for young people. I think they’ve done a pretty good job managing COVID. A vote for the Liberal maintains the status quo.

Conservatives – Normally this would be the party that would rollback the carbon tax, marijuana legalization, abortion, and gun control. But that’s not what they’re promising this election (assuming you trust them). They are still champions of natural resource extraction and building more pipelines, but now they want to add a convoluted system that awards Canadian Tire money for green products when you pay the carbon tax. At least they’re slowly understanding that climate change is real.

NDP – Jagmeet Singh is pitching the NDP as having the courage to act when Liberals are just “all talk.” He’s appealing to progressives who are upset with broken promises on electoral reform and pharmacare, and the empty words on reconciliation, feminism, and climate action. The key promises from the NDP are increasing taxes on the wealthiest and using the money to add dental and drugs to public Medicare.

Greens – The Green Party is unfortunately in disarray. This should be the climate change election, but they’ve been waging an internal civil war for the past 6 months and are barely running a national campaign. It’s still fair to say that anyone elected from the party will have the environment as their top priority and be committed to aggressive climate change action. But they’re facing an uphill battle to elect anyone beyond Elizabeth May.

People’s Party – The PPC has evolved from the anti-immigrant/Maxime Bernier ego project into the voice of the anti-vax COVID-skeptics. And they’re poised to do really well this election. If your main concern is vaccine passports, then a vote for the PPC is probably your best avenue to show your anger (as long as you’re ok with climate change denial and racist undertones).

Bloc Quebecois – I won’t pretend to understand Quebec politics. But the Bloc is still the protector of the distinct french society in Quebec and will likely do quite well.

Even once you’ve decided what party you like, you might not want to vote for them. Weird, I know. Unfortunately, our antiquated voting system works best with 2 parties, but there are 6! viable parties in Canada right now, which leads to a lot of wasted votes. If you want your vote to matter, you’ll be tempted to “vote strategically.”

If strategic voting upsets you as much as it upsets me, I’d suggest you check out Fair Vote Canada, an organization devoted to making sure everyone’s vote counts.

That said, if you really are an ABC (anything but Conservative) voter and want to maximize the impact of your vote, you can use a website like 338 Canada, which combines 2019 results with 2021 polling, to try and predict the outcome this year. Warning: the error rate is quite high. And although the Liberals like to encourage strategic voting, it is worth pointing out that west of Ontario, the NDP are actually better positioned to beat the Conservatives in most ridings (except in Calgary where a strategic vote for the Liberals makes more sense).

No matter who you decide to support, I hope you exercise your right to vote this year.

Note: Advanced polls are now closed, but you can vote in person on election day – Monday September 20 – bring a mask and a piece of ID. Go here to find out more: HowYouVote.ca