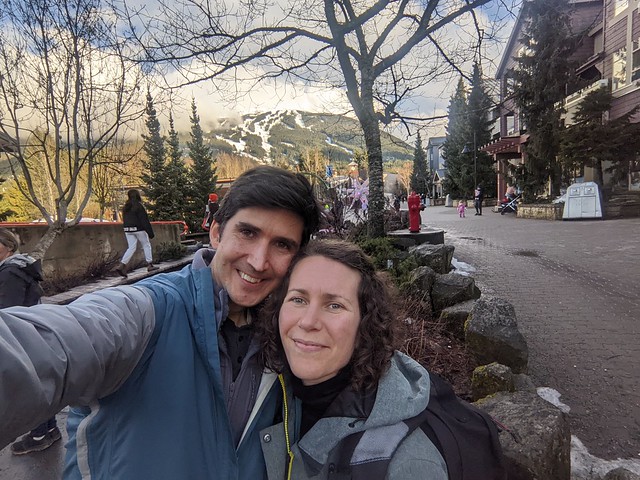 The highlights of our trip included:

Playing in the snow. No, we didn’t do any skiing or snowboarding – Emily and I gave that up years ago, although after watching everyone having fun on the slopes, I’m tempted to learn to ski with Astrid. It was getting warm and melty while we were there, but there was still plenty of snow to play in.

We made it onto the mountain (and rode the gondola) to spend a rainy afternoon at the tube park. Astrid was eager to be the first one down, chose the most extreme lane, and then asked the attendant to spin her. Brave kid.

Relaxing in the pool. Our hotel had a hot tub, and we spent one morning at the public pool. Astrid immediately made a new friend, and they played together for over an hour.

Astrid had a whole day away from us when she went to spring break camp at the racket club. The kids there played games, had a snowball fight, and drank hot chocolate. For most of the trip, Astrid was having “big feelings.” It was either “I love Whistler” or “this is the worst day ever!” without much in between. It was a nice treat to spend a day apart.

Emily and I spent our adult day at the Scandinave Spa. We got relaxing massages, spent hours doing the hot/cold circuits, and read our books. It was fun to try out the different hot tubs, saunas, steam rooms, ice-cold baths, and frigid waterfalls. The cold plunges were painful, but they really made you feel alive when you got out.

We ended our trip with a hike to the Train Wreck just south of Whistler. It was a perfect short hike with a suspension bridge and colourfully graffitied boxcars to explore. Astrid was slow and plodding for the hiking sections but perked up for the bridge, and she loved climbing on the boxcars. We need to get her accustomed to walking longer on her own for our summer adventures.

This was our first trip with an electric vehicle. We drove an electric Hyundai Kona from Modo. We thought it would be challenging to figure out how to charge the vehicle but it was shockingly easy. Technically we didn’t need to charge it all – a return trip to Whistler is less than the 450 km range. Almost everywhere we went had charging infrastructure – our hotel, the community centre, and the parking lots in Whistler. And it was way cheaper than driving a gas-powered vehicle.

Over 5 days, we drove 294 km and used 45 kWh of electricity – just $4.50 worth if we were charging at home (the public chargers are more expensive but include parking). In an equivalent gas-powered ICE vehicle, we would have used 24 litres of gas and spent $48. That’s a huge difference! We’re not in the market for a new car, but it would be electric if we were. For now, we’re happy to see Modo expanding its electric fleet.

We’ve got a longer road trip planned this summer with the same EV. We’ll really get to put the charging infrastructure across Canada to the test as we drive from Vancouver to Manitoba and do some camping along the way.

More photos from our Whistler trip.