Camping in the Rockies 2022

10 years ago we had a beautiful winter wedding celebration in the Rockies and have been planning on returning ever since. We got to revisit all the spectacular sights from that trip but this time in the summer and with our daughter.

Banff was busy but beautiful. It’s super popular with tourists for a reason. Even though we are blessed to be able to see mountains every day from Vancouver, there is something majestic about the Rockies.

We tented for 3 nights at the Johnston Canyon campground. The sites were nice, but the mosquitoes were awful. We still had fun camping – cooking outdoors, playing games in our tent, and roasting marshmallows on the fire. This year we invested in a nice double air mattress from MEC, and I’m so glad we did. It’s a little cozy for 3 people, but way more comfortable than our thermarests.

The waterfalls along the Johnston Canyon hike were even more beautiful in the summer than they were in the winter. The hiking trail was crowded and congested at points, but still enjoyable. We waited in line for 30 minutes to get into the cave at the lower falls, but the big rocks at the upper falls were more impressive and less busy. It was our first big hike of the trip, and we were encouraged that Astrid walked the whole thing on her own and my hip felt good. 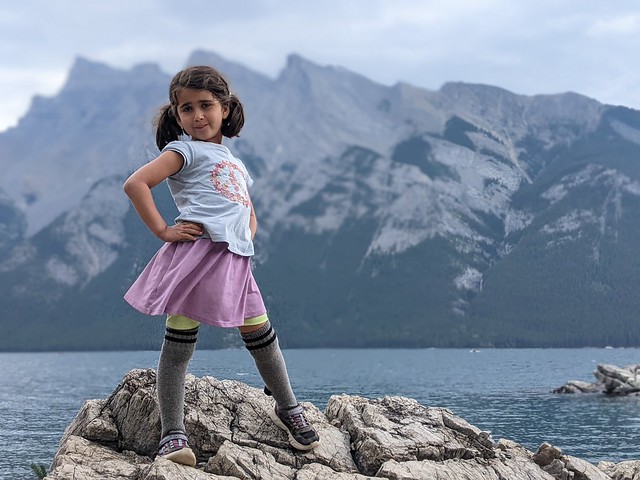 We took Astrid to the sites that made our wedding so special – the community centre where we got married, Nourish Bistro where we had our amazing wedding reception, and the museum downtown where we took wedding photos. A lot has changed in 10 years – Nourish has a big new location on Bear Street, car-free streets make the downtown more inviting with big patios, and public transit is making it possible to get to trailheads without a vehicle. Now they just need a train to Calgary.

We discovered a few new places in Banff National Park. We really enjoyed Cascade Ponds, with its short walking trails, shallow river bed to play in, and curious prairie dogs. Lake Minnewanka was ok – it was super windy while we were there and Astrid was in a mood. The interpretive centre at Cave and Basin gave some interesting history about the founding of the park and it was cool to see the hot springs, but otherwise was underwhelming.

We spent more time in Jasper and liked it a lot more than Banff. The town is cute and less crowded, there is more wildlife to see, and there is a huge range of kid-friendly hikes and adventures.

We spent 5 nights at the Wabasso campground at a beautiful site (A54) near the Athabasca River. It was blessedly mosquito-free most of the time and frequented by other animals. Shortly after we arrived a wapiti (elk) wandered by and spent a few hours hanging out, unphased by our presence.

On our 3rd day, I was up early reading in the hammock when a young black bear padded through our site. I didn’t know what to do and felt a bit trapped. Luckily we didn’t have any food out and it kept moving. I managed a weak “Ummmm … there’s a black bear beside the tent” to warn Emily and Astrid, but it was gone quickly. Unfortunately, I was too stunned to get a picture, and we never saw it again.

We did a lot of hiking and adventuring in Jasper. We explored the Athabaska Falls.

We spent the hottest day at Annette Lake. The water was cold, so we alternated between basking in the sun and cooling off in the lake.

We rafted down the Athabaska River. We opted for a gentler ride, but Astrid was keen for more adventure. Next time we’ll try the class 2 rapids.

We hiked the Path of the Glacier, which was both inspiring and depressing. The steep mountain walls and the chunks of glacier ice floating on a bright blue pond were cool to see, but it was hard not to notice the parking lot full of gas-burning cars as people hurry to catch a glimpse of the last remaining glaciers.

One day Astrid chose to go to kids camp (she wanted more time to play with other kids), which gave Emily and me the opportunity to do some more adventurous hikes. We climbed Pyramid Bench and explored Maligne Canyon (which looks much cooler in the winter).

We took the SkyTram up to the top of Whistlers Mountain which provided some spectacular views of the area. It was still a challenging hike from the top of the tram to the peak, but it was well worth it.

We love the Rockies, and I expect we’ll be back again soon. Jasper is only 8 hours from Vancouver (an hour closer than Banff), and I’d love to do more adventuring in the area.